Finishing an unfinished basement is a great way to add square footage to the living space of your home without having to knock down walls and construct expensive additions. But, when factoring in the cost of such a project, many homeowners forget to factor in the cost of adding an egress window.

An egress window is a window that’s large enough to serve as an emergency exit in the event of a fire. All rooms that function as living spaces in your home are required by law to have an egress window, whether they’re above or below ground.

You can’t just use any ordinary window as an egress window. An egress window must adhere to building code size guidelines to ensure that the room’s occupants can make a quick exit in the event of a fire.

In this guide, we’ll review basement egress window requirements, explain how to measure your egress window to determine whether it’s to code. We’ll also review the different types of windows that can function as egress windows. 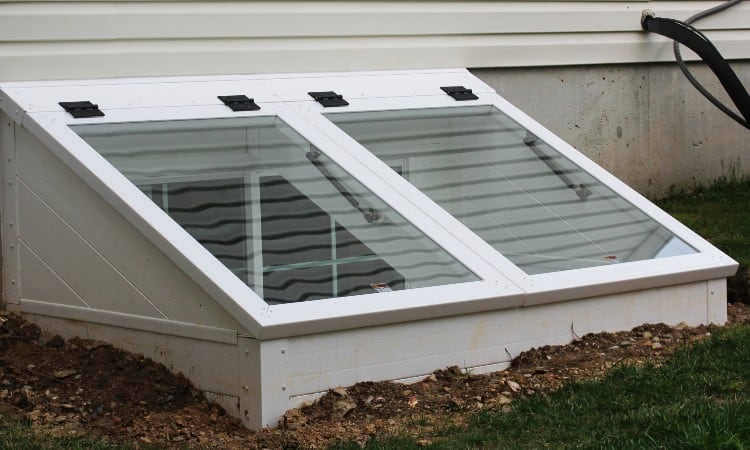 What Is An Egress Window in a Basement?

An egress window is a window that’s large enough to serve as an escape window for your family or as an entrance for first responders in the event of a fire. They can either be entirely above ground or below ground level. If below grade, the egress window is surrounded by a window well, which serves as a buffer between the window and the earth.

Basements that function as bedrooms, dens, workshops, offices, home gyms, or other living spaces must have egress windows.

Egress windows differ from smaller hopper windows, which are typically found in the basements of older windows. Hopper windows open inward to allow fresh air into the basement but aren’t large enough to serve as emergency exits.

Do You Need An Egress Window in a Basement? 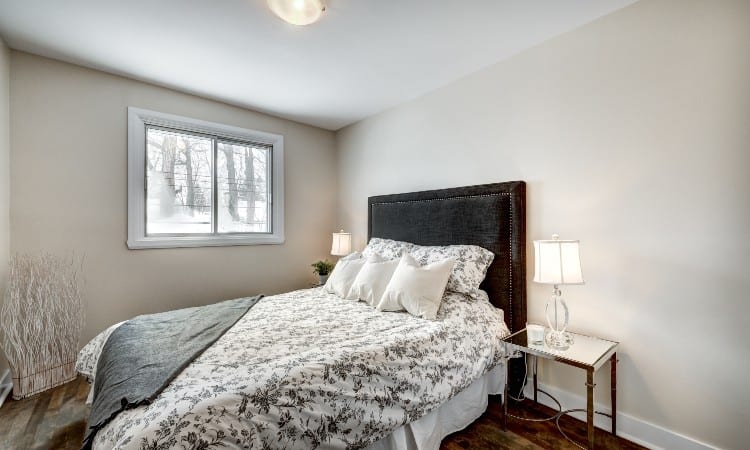 While you may be tempted to ignore the need for an egress window in the basement, don’t.

Without an egress window, a basement living area or bedroom could trap occupants in the home with no quick means of egress in the event of a fire. Building code requirements also require that every finished room in a home have at least one egress window.

The International Residential Code requires egress windows in every habitable space in a home, including the basement. That means if you finish your basement and turn it into a bedroom or separate living space, according to the IRC, you must add an egress window.

In addition to being 5.7 square feet, an egress window opening must also be at least 24 inches high and 20 inches wide.

Egress windows are also important sources of light and ventilation, which are also requirements for basement windows. According to IRC code, The area of the glass portion of the window should be at least 8 percent of the total floor area to allow for enough natural light to enter the basement. That 8 percent minimum can be reached with an egress window plus other windows in the basement.

The window opening should be at least 4 percent of the floor space to allow for adequate ventilation.

One of the easiest ways to determine if the emergency exit window you have or are considering purchasing is large enough to meet IRC Code requirements for basement egress windows is to use the chart below, which uses the width and height of the window to determine its total square footage.

How Many Egress Windows Are Required in a Basement?

Does a Laundry Room Need a Window?

Laundry rooms in finished or unfinished basements don’t require egress windows or windows of any kind. Of course, the dryer must be properly vented to ensure the heat and humidity created by the dryer and any exhaust gases (if the dryer is gas) are sent to the exterior of the home. 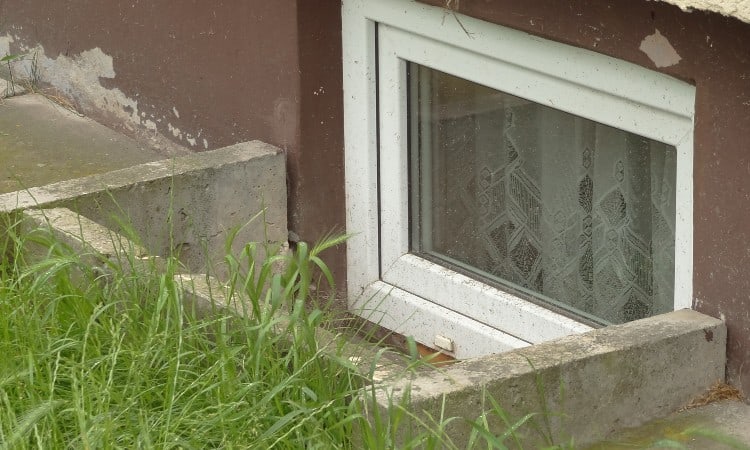 Basement windows come in a range of different types, ranging from casement to double-hung to in-swing windows. Ahead we’ll detail how each window works as well as the advantages and disadvantages of each.

Single-hung and double-hung windows consist of two separate sashes, each of which has its own frame. The interior sash is inset from the upper sash, allowing one or both windows to move up or down to open. With a single hung window, only the lower sash moves up or down to open the window. A double-hung window allows both sashes to move, allowing you to open the top or bottom of the window.

Casement windows are the best option if you don’t have a lot of wall space for meeting the IRC’s minimum size requirements. This type of window, which is popular in large rooms, swings outward like a door using a crank with a rotating handle.

Unlike single-hung or double-hung windows, casement windows create an opening that’s almost as large as the rough opening, maximizing the space needed to reach the IRC’s 5.7-square-foot minimum opening requirement. And, since the entire window opens as opposed to half of it, it’s the ideal window for providing maximum ventilation.

With their crank-style mechanism of opening the window, casement windows are easy to operate for those who struggle to open a standard single or double-hung window. And, with their slimmer frames, they allow more light in than any other style of window.

Per their name, in-swing windows, which look similar to a casement window, open into the room instead of outward.

Rather than a crank, an in-swing window typically has latches that hold it closed. When the latches are released, the window swings inward into the basement. This type of window is ideal for below-grade egress windows that may have well prevented a casement window from opening outward.

If you do choose an in-swing window, you must make sure there is enough clearance inside the basement to allow the window to open inward.

Sliding windows consist of two panes of glass, one of which slides on a track horizontally to open the window. This type of window is typically wider than it is high, making it ideal for basement windows with a limited amount of vertical space available.

Like casement windows, sliding windows have a thin frame, maximizing the amount of light the window opening can let in.

Sliding windows can also be opened quickly and easily thanks to a roller that allows them to smoothly slide along a track. This makes them ideal for egress windows, and their large size allows for excellent ventilation.

They can require a significant amount of space to reach the IRC’s square footage minimum as, like casement windows, only half of the window opens.

Awning windows open from the bottom with a hinge at the top of the frame. This window style is popular with basements as it makes it easy to ventilate the basement while still protecting the opening from rain.

How High off the Floor Should an Egress Window Be 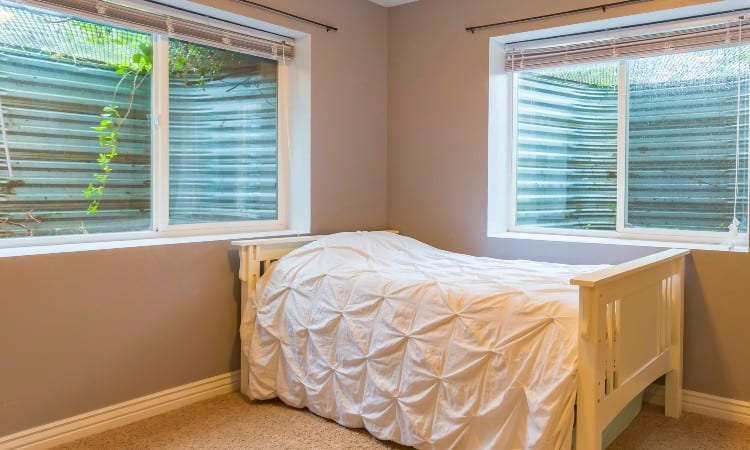 According to the International Residential Code, an egress window can be no higher off the basement floor than 44 inches to ensure that occupants in the basement can easily access it in the event of a fire. This can be a challenge in deeper basements, requiring you to dig a deeper well to allow for a window that extends down far enough to meet IRC code.

It’s also important to note that egress windows must also be free from obstructions that would inhibit anyone from exiting through the window. This means you cannot put lockable metal bars over the exterior of the window.

While you can have standard latches on the window for security, you cannot install any locking system that requires a key or combination that can impede one’s ability to exit via the window. If you’re concerned about security, consider installing an alarm on the window.

If you’re turning your unfinished basement into a finished basement, it’s crucial to consider the cost of installing the necessary egress window, as the costs can add a significant chunk to the project’s overall budget.

Installing an egress window in your basement ranges from about $2,500 to $5,300. This includes the cost of the window and installation. The cost can vary significantly depending on the size of the window and the complexity of the install.

If you need to install a new window well, plan on spending an additional $2,700 to $5,700. This cost includes the excavation and finish grading and the material used to construct the window well.

Does a Walkout Basement Need an Egress Window? 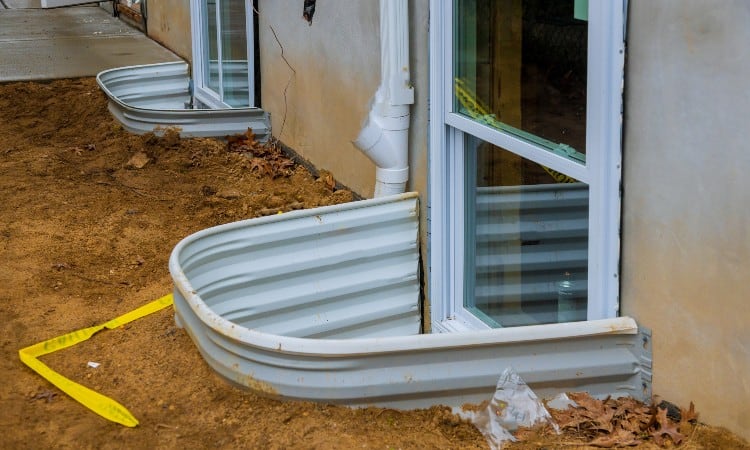 Windows that are fully or partially below ground level typically use window wells to create a space between the ground and the window for light and ventilation. For a basement egress window to adequately serve as an egress, not only does the window need to be large enough to allow an adult to pass through it easily, but so too does the well.

As such, the IRC has stipulations for window well size as well as the window size. The distance from the egress window opening and the back of the well should be no less than 36 inches to allow enough clearance for an adult to pass through.

The minimum area of the egress well (its length times its width) should be no less than 9 square feet. An egress window also must be able to fully open without any interference from the well.

For deeper window wells that extend more than 44 inches into the ground, the egress ladder or steps must be permanently installed to allow occupants in the basement to easily reach ground level.

The ladder or steps can’t extend into the well more than six inches and must have rungs spaced apart no more than 18 inches. Also, the ladder rungs must be at least 12 inches wide to ensure they are easily climbable.

Egress wells that are deeper than a couple of feet often have grates or covers to prevent people or animals from falling in them. If your window well has a grate or cover, it must remain unlocked and easy to open so someone can easily escape through the well in the event of a fire.

While a finished basement can be an excellent location for a den, study, workshop, or even a bedroom, the space must have a proper egress window to ensure it’s a safe place for your family.

An egress window serves as an exit in case of an emergency or as a means for a firefighter to enter your home in the event of a fire. Egress windows are also legally required by the International Residential Code. With several different egress window styles to choose from, you can easily find one to suit your basement.