With people spending more and more time at home, many have looked for ways to expand the square footage of their houses. While constructing an addition is the most common way to make a home larger, sometimes adding to the footprint of a house simply isn’t possible.

Another option is to go underground by adding a basement to an existing home that doesn’t already have one.

While digging a basement under an existing home may seem extreme, it is possible. There are construction companies that will lift or even temporarily move your home to excavate under it to create a new basement. While such a project can add hundreds and even thousands of feet of living space, it’s a complicated and expensive project.

In this article, we’ll discuss how you can add a basement to an existing house. We’ll also review the pros and cons of such a project and how much you can expect to pay for it so you can determine if such a major project is right for your home.

Can You Add a Basement to an Existing House?

If you’re considering whether to add a basement to your house or not, first consider if it’s even feasible by looking at the foundation. If your home happens to sit on a crawl space, adding a basement is doable.

A construction company can either lift the house and support it with blocks or temporarily move it to an adjacent location. Once out of the way, the contractor can excavate and pour a new concrete foundation and walls.

If your home is on a slab, the process is much more complicated. The home would need to be removed, and the entire slab would have to be torn up and removed to allow for excavation to take place.

And, since the plumbing for a slab home is typically in the slab, that would also have to be removed, forcing the lower part of the house to be partially replumbed. The complexity of such a project would add significantly to an already expensive project.

Another important factor to consider is soil quality. While hard clay soils may make such a project possible, soft loamy soils can wash away over time, leaving gaps below and around the basement’s foundation.

Also, consider the water table around the home. Homes in coastal areas have high water tables that can flood basements. For example, in Florida, you’d be hard-pressed to find a basement. This is because the high amounts of rain, proximity to underground aquifers, and shifting soil make a basement unfeasible and highly prone to flooding.

In addition to reviewing your home’s foundation, you’ll also need to determine if adding a basement is something you can legally do. Check with local building codes and your Home Owner’s Association, if you have one, to see if you are permitted to add a basement to your home. Make sure to submit a plan to your HOA for approval before spending any money on a basement addition project.

You’ll also need to consider the space needed to complete such a project. While the basement itself may not take up any additional space on your home’s lot, constructing it likely will.

Most builders prefer to dig from outside the home. This means they’ll need room next to the house to allow for heavy machinery and other tools. If they plan on moving the house, you’ll need to be a large clear plot of land adjacent to the building site that’s large enough to hold the home while the construction of the basement is completed.

Can I Build a Basement Without Planning Permission?

Excavating under your home to add a new basement is not a project that can be completed without planning permission or a building permit. This is a major home renovation project that involves altering the structure of a home.

As such, permits are needed to make sure the construction job is completed safely and that the home is safe for occupancy once the project is complete.

Adding a Basement to a House: Pros and Cons 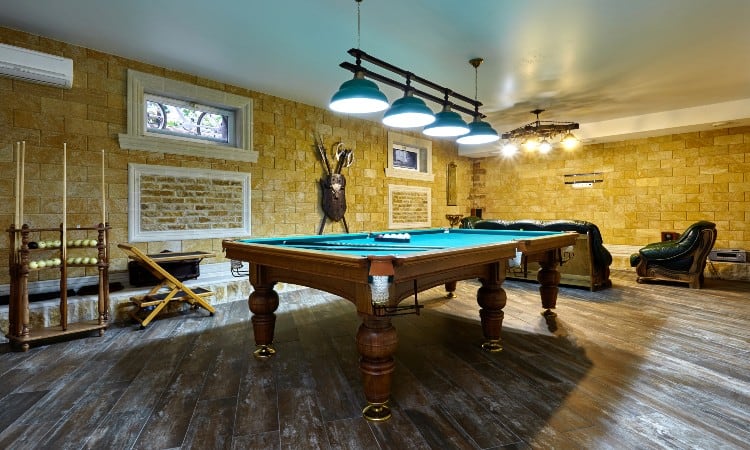 Just remember that if you plan to expand a basement for use as a living space, it must meet certain building code requirements. Make sure you plan for an exit window to keep your basement living area in code.

If your home is being overrun by stuff because you don’t have storage, sometimes adding a basement can alleviate those issues. A large unfinished basement can provide plenty of space for storing everything from Christmas decorations to bicycles.

While having basement storage is useful, the cost of adding that basement will likely dwarf the value of the objects you plan to store in it. Renting a storage unit may be a better option.

Generally speaking, appraisers and listing agents don’t count living space that’s entirely below grade in the home’s overall square footage. Whether or not they do depends on the local county assessor, who determines whether you can include below-grade living space in a home’s total gross square footage.

That doesn’t mean your expensive basement investment offers no return. A finished basement adds to the value of the home, even though the square footage is not included in the listing. It just may not add as much as a similarly sized addition to the ground floor living space.

Whatever value the finished basement adds to the home, it will almost certainly be significantly less than the cost of adding it.

The biggest barrier to adding a basement is by far cost. The complexity of lifting a house and essentially rebuilding the foundation while ensuring the safety of the workers performing this job, makes such a job very complex and, hence, very expensive.

Keep in mind that this is to add an unfinished basement. To finish the basement, expect to pay another $20,000. This steep cost far outweighs the increase in value you might get for adding a basement and often makes it too expensive to consider.

More than any other place in the house, basements can be a haven for pests. Insects and rodents are attracted to the basement’s high moisture content and dim lighting. And, once these pests find their way into the basement, it’s only a matter of time before they make their way to the upper levels of the house in search of food.

How To Build a Basement Under an Existing House 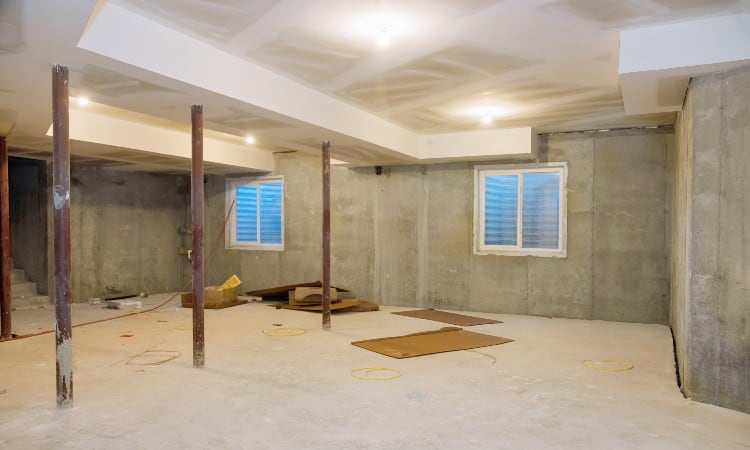 If you plan on building a basement under an existing house, you’ll need to hire a general contractor. This is certainly not a DIY job. This type of project involves different kinds of tradesmen, including construction professionals experienced in lifting houses and pouring foundations to plumbers and electricians. A general contractor can lead you through all these steps while helping you obtain permits.

While an experienced and licensed contractor will lead the project, it’s important to understand the process yourself so you can keep tabs on the project.

1. Prepping for the Renovation

The first step in preparing for a basement addition is planning. Adding a basement is a big project that involves the use of heavy equipment. With that in mind, you’ll need to clear your yard of any ornaments or objects that may get in the way, such as lawn furniture, potted plants, statues, and other obstacles.

A basement addition requires a significant amount of digging, which means you’ll need to make sure utilities are clearly marked in the yard. This is something you usually can’t leave up to the contractor as utility companies typically require the homeowner to make requests for marking underground lines.

The contractor will employ one of two methods for digging a basement under your home. They can lift the house with jacks or a crane and support it with blocks and tie-down straps while the excavation and construction take place below. They can also lift the house off the foundation with a crane and lower it in an area near the site. If there are houses, trees, or other structures nearby, the latter may not be possible.

3. Digging Out the Basement

Once the house is elevated or moved, it’s time for the excavation to begin. Most construction companies will use a backhoe to dig out the basement. This process can take place more quickly if the house is set off to the side than if it is simply elevated above the site. If the house is elevated, your contractor will likely dig out a ramp that leads under the house and scoop out the soil with the front loader.

Adding a basement under a house is more than just digging a hole and pouring cement. There are other factors you need to consider, including plumbing, drainage, and insulation.

When the house is lifted, the contractor will have to account for the plumbing to make sure it isn’t damaged in the process. Also, keep in mind what plumbing needs your new basement will have. Are you planning on installing a bathroom in the basement? If so, the contractor will need to factor that into the plan before pouring the concrete.

Likewise, if the basement will be finished, make sure there is a plan for insulating the basement once the concrete is poured.

5. Pouring the Walls and Foundation

Once the construction team has finished excavating and grading the basement, the next step is to pour the walls and foundation. They will use forms to create the footings responsible for bearing the load of columns and walls.

The columns support posts, which provide support for the beams and the floors. Once the footings are established, the builder will use forms to create the walls.

How Much Does It Cost to Add a Basement to a House?

Keep in mind that once the basement has been added, you’ll still need to spend money on installing plumbing and drainage, which can run from $3,000 to $9,000. Once the basement is complete, you can completely finish it to serve as a living area with an additional investment of $12,000 to $33,000.

Given these costs, it typically doesn’t make sense to add a basement. If you have room for it, a more affordable option is adding an above-ground addition, which ranges from $21,000 to $73,000. And, since additions can typically be added to the square footage of a home’s living space, it offers a better return on investment when you go to sell the home.

Is Building a Basement Under an Existing House a Good Idea?

There are some exceptions. If you’re intent on adding to the living space of your house and building an addition isn’t an option (and you aren’t willing to move to a bigger home), then adding a basement may be the only option. If you choose to go forward with this project, make sure you check with your Home Owner’s Association and local building codes to make sure you’re authorized to complete this type of renovation.