Selecting the appropriately sized lumber for a project can take a lot of research and often depends on species and grade of wood, potential loads, plus how they will be used. Not all species have the same strength, and the grading often affects the distance they can safely span. Additionally, using them for a joist, rafter, or beam also affects the span. So, if you’re wondering how far a 2×10 can span, we’re here to help. 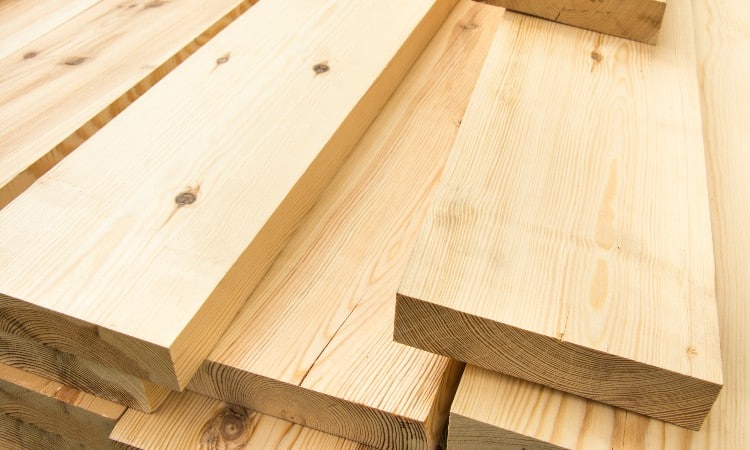 In the construction industry, span is the term used to identify the unsupported distance a structural member or component traverses or bridges between supports. It refers to the distance, gap, or space between supports that carry the structural piece. It typically is used when identifying the free or unsupported distance of a beam, joist, slab, floor, header, or rafter between structural supports such as posts, walls, or beams.

You may come across the terms single span, multi-span, long span, and even span-by-span in construction. Don’t let them confuse you, they are just ways to identify unique aspects of different structural spans.

Single Span: means the structural member – beam, joist, floor, slab, or rafter – is only supported, pinned, or fixed at its ends.

Multi-Span: commonly refers to a structural member spanning across multiple supports to minimize bending stresses. For example, a beam carrying a floor being supported at the ends and with equidistance intermediate posts along its length. The bean is multi-spanned, as is the floor being supported.

Free Span: typically, another term for span, it is the free or unsupported space provided between the supports of a structural component. 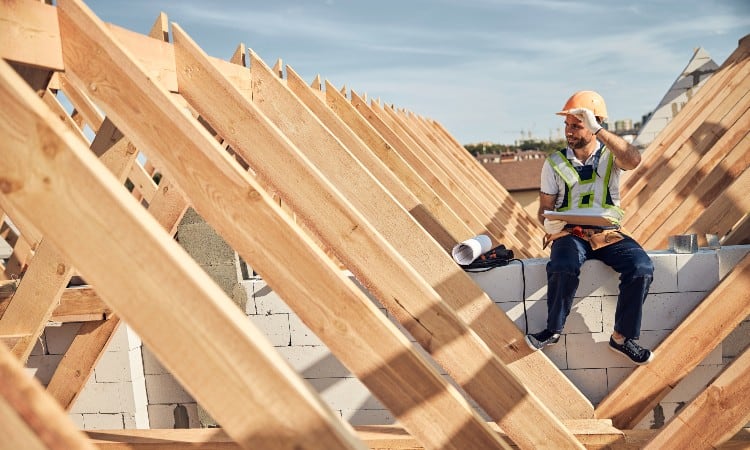 The distance a joist, rafter, or beam can span depends on the wood species, grade of lumber, loads, and how they are used. Quite often, the distance a beam can span is also determined by the spacing of joists or rafters it will support, and vice versa. Additionally, the span of joists and rafters is affected by the spacing, typically 12”, 16”, 19-1/2”, or 24” between each other.

The International Residential Building Code (IRC) is used in most of North America as a guide for National, State, Provincial, and local codes. It is updated every 3 years, most recently in 2021, and identifies the maximum safe loads and spans for beams, joists, and rafters in an effort to minimize or negate structural failure and human injury or death. Before finalizing structural plans or beginning to build, it is best to check with your local Building Department or a Structural Engineer.

The species of lumber available in your area commonly is what grows within inexpensive shipping distances. The further it is shipped, the greater the costs. Most lumber yards, however, carry a variety of construction lumber and can order in different species, usually at premium prices.

The IRC and the American and Canadian Wood Councils test and publish tables and information on maximum structural loads, spans, and standards for different species and grades of wood materials and products.

A strong, durable wood composed of 4 major species of southern pine with similar qualities and appearance with overlapping ranges. The trees range from as far north as New Jersey and south along the coast into Florida. They reach westward into Missouri and Texas and through many of the southeastern states. Southern pine makes up about 37% of lumber used in the US. It dries quickly, absorbs chemical treatment and paint easily, and is used in all aspects of construction.

One of the strongest and most durable species, it is known for its plate and nail holding ability and is a favorite of engineers and architects. It has excellent dimensional stability and high resistance to the forces of weather. It is used in single and multi-story residential, commercial, and industrial construction.

A highly versatile combination of Western Hemlock and Fir species known for its light coloring and weight, while still being strong, durable softwood lumber. Although excellent for structural use, due to its coloring and appearance, it is also used for millwork and molding.

A lightweight versatile combination of lumber species often used for framing. Typically harvested from mixed stands of coniferous, making it easier to combine than separate the species.

While spruce has low resistance to decay outdoors, it does well when treated or used indoors. SPF is common across the continent making it an inexpensive choice for all aspects of residential, industrial, commercial, and agricultural construction. 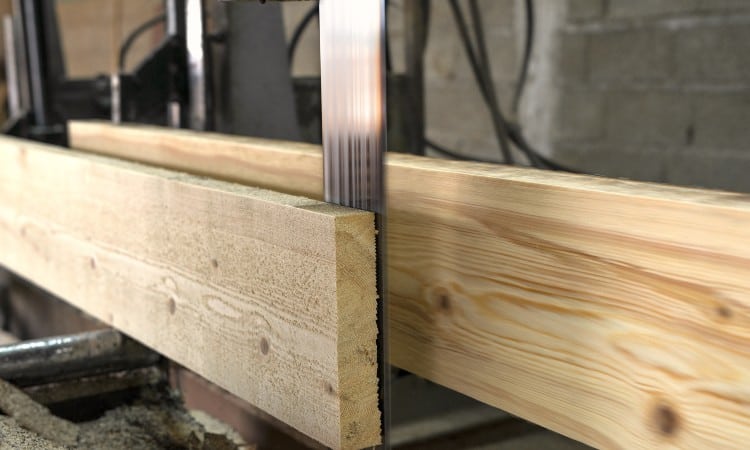 Lumber is graded for stress use, non-stress use, and appearance. The important grading for construction use is stress test grading. 2” through 4” dimensional lumber is stress graded for structural use based on characteristics such as grain, knots, checks, and other deformities that affect its bending strength. Grading is standard and uniform across the industry, so the grades mean the same from Barrow Alaska to Brownsville Texas, and all points east and west in between.

The structural capacity and span of beams, joists, and rafters are dependent on dead load, live load, snow load, and wind load, and vary from region to region. Bedroom floors typically are rated for live loads of 30PSF, living areas for 40PSF, unoccupied attics for 5PSF, and storage attics for 10PSF, while all also have a dead load of 10PSF or 20PSF to account for building materials. Snow load often is substituted for live loads, especially for outside decks and roofs. Snow loads can range from ≤30PSF to 70PSF or more in some localized situations.

For purposes of comparison, we’ve generated the following span tables using #2 – 2x10s. It should be noted that beam span is dependent on the effective joist span length, which ranges from 6 to 18 feet in the IRC. The shorter the joist span, the greater the beam span allowable. The interior beam span is also affected by the number of floors and roof load unless it is a clear span using trusses. A beam supporting two stories instead of one typically has spans shortened by about 25%.

** Rafter span based on 30PSF Snow Load, 10PSF Dead Load, and rafters not attached to the ceiling 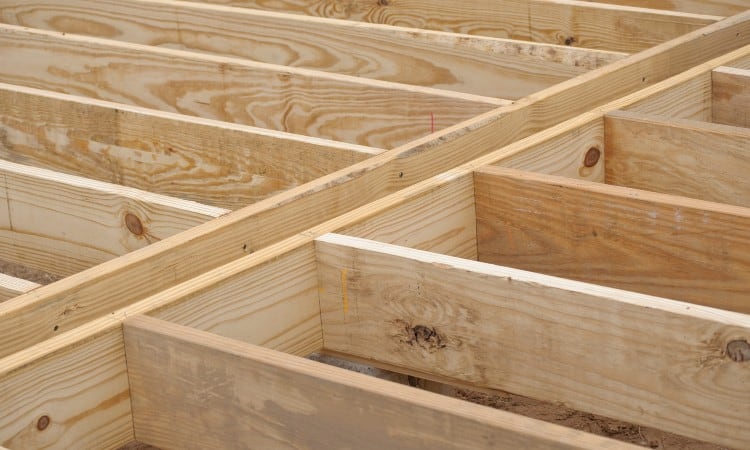 The distance a 2×10 can span depends on the wood species, grade, moisture content, spacing, and load parameters, along with other factors. Using it for a beam, floor joist, header, ceiling, or rafter also affects the maximum span. Doubled, tripled, or thicker laminations of 2x10s increase the load capabilities and the span distances too. Span values are drawn from the 2021 IRC, but it is advisable to check with your local building department or a Structural Engineer.

Headers have a few more factors affecting span than just species and grade of lumber, such as interior or exterior walls, snow load, number of floors, center bearing vs clear span, and building width.

Ceiling joists have several additional factors that affect their span in addition to species, grade, loads, and spacing. Whether the attic space is uninhabited without storage or uninhabited with limited storage affects the span too. Turning an attic into a living space typically involves strengthening the floor, so the services of a Structural Engineer are recommended.

Even #3-grade lumber will span between 16’-1” and 25’-2” depending on species and spacing. Using the attic space for limited storage reduces the spans, so check the local codes for distances.

Rafter spans depend on wood species, grade, spacing between rafters, snow or live loads, dead loads, and whether the ceiling is attached to the rafters or not. Rafters without an attached ceiling can span further than those with it attached. Additionally, the lower the snow or live load, the greater the span possible. Plus, if the spacing between is 12” the span is greater than if it is 24”, so keeping all the factors straight is important.

Beam span depends on the species and grade, as well as the effective joist span. The greater the joist span, the less the beam span. Additionally, a 2, 3, 4, or more ply beam can carry greater loads and span further than beams of lesser plies but similar depths.

How Far Can a Double 2×10 Span Without Support?

The distance a double 2×10 can span without support depends on its species, grade, spacing on center, load parameters, wet or dry service condition, and its purpose. A doubled 2×10 joist has different spans and conditions than a double 2×10 beam, header, or rafter. A double #2 – 2×10 header spans from 3’-7” to 9’-2”, depending on the number of stories and building widths, plus other factors. It’s always best to check all factors that can affect the span, or consult a Structural Engineer.

A double 2×10 beam’s span is dependent on species, grade, the spacing and span of the joists it supports, and the number of floors and load parameters. A 2 ply 2×10 beam of #2-Southern pine with a live load of 40PSF can span between 6’-0” and 10’-4” with a joist span between 6’ and 18’. One of DF-L, Hem-Fir, or SPF under similar conditions can span between 5’-6” and 10”-0”. Shorter joist spans mean longer beam spans, as do better wood grades, but heavier loads result in shorter beam spans.

Doubling or sistering a 2×10 joist is usually done to strengthen or repair an existing plank of the same dimensions, not extend its length. Joists may be doubled to turn an attic into a living area, to support a grand piano, or a hot tub. The species, grade, and spacing commonly affect the length, with a double #2-2×10 DF-L at 12” centers spanning 18’.

The distance a 2×10 can cantilever depends on what and how it will be used, the spacing between joists, roof width, floor and roof live loads, ground snow loads, as well as grade, species, and other general factors. Typically, 2×10 joists at 16” centers can cantilever a maximum of 1/4 of their back span. So, one spanning 16’ should be able to cantilever 4’.

Having said that, though, Table R507.6 of the 2021 IRC limits a 16’ Southern pine to 3’-4” and DF-L, Hem-Fir, and SPF to 3’-3” for 14’ or longer spans with live loads of 40PSF. As the load increases, however, the spans decrease. Additionally, many local codes max cantilevers at 24”, so it’s best to consult your local building department or a Structural Engineer.

Change up the grade and load factors and the spans can increase or decrease. To stay in the safe zones, consult your local building department or a Structural Engineer. Hopefully, we’ve provided you with the information required for your project.