Selecting lumber for different projects can be difficult even for the pros. If you’re planning to use 2x6s for joists, rafters, decking, beams, or headers, you’re probably wondering how far can a 2×6 span without support? Span depends on wood species and grade, use, spacing between members, and potential loads. If you’re finding this confusing, we’re here to help.

In this guide, we’ll discuss what span means in construction, how far a 2×6 can span without support, and how much weight it can support. We’ll also explore how far a 2×6 can reach as a floor or ceiling joist, and as a rafter. Additionally, we’ll explain 2×6 decking and deck joist spans, 2 and 3 ply deck beam spans, and header spans so you have the information needed for your 2×6 building projects. 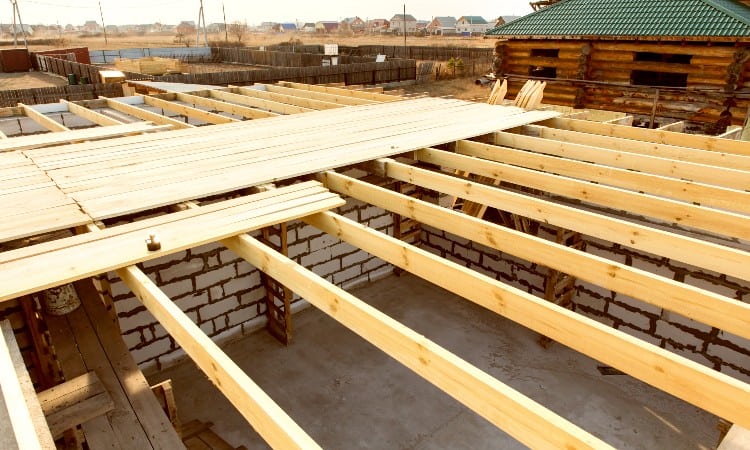 Span Definition – What Does Span Mean in Construction?

There are many terms that have different meanings, and span is one such word. Span, in construction, means the distance a structural member traverses from support to support. It is measured from the center of one support to the center of the next.

The span differs, however, if it is horizontal like a joist or beam, or diagonal for rafters. Loads limit joists to shorter spans than rafters of the same grade and species. Rafters span greater distances from support center to support center, but the horizontal distance from centerline to centerline is often the same as that of a joist.

To add to the confusion, there is the effective span which is measured from the center of one support to the center of the next support. The clear span is the space between adjacent support faces. Plus, there is the free span or long span that commonly refers to structures without intermediate internal supports, so all loads are carried on exterior walls. This provides larger unobstructed spaces or rooms. Hockey arenas, gymnasiums, and airplane hangars are examples of long span construction.

How Far Can a 2×6 Span Without Support?

A 2×6 can be used for floors, walls, ceilings, roofs, and other facets of construction. The allowable distances it can span without support are identified in National, State, Provincial, and Local Building Codes. Since some structural variables are localized, it’s best to check your local code for allowable spans.

A general rule of thumb for joist span is 1-1/2 times a board’s depth in feet, however, it’s not that simple. The distance a 2×6 can span is determined by the species, grade, location, use, load, and spacing. Based on building codes, a 2×6 can span anywhere from 2’-1” to 20’-8” depending on the affecting factors. Ceiling joists don’t normally have the same load restrictions, and so can span greater distances.

Wood species and grade identify strength, which in turn determines load capacities and deflection over distance. Location frequently has load variables too. Bedrooms commonly don’t have more than 2 or 3 occupants moving around, while a living room may have 10 or more, so load requirements for living and sleeping areas often differ.

2x6s may be used for floor joists, ceiling joists, or rafters and have differing spans for the same grades and species. Loads are divided into live or snow loads and dead load considerations. A plank used for a floor joist commonly has different load factors than a ceiling joist or rafter.

Floor joists may support drywall ceilings on the underside and marble tile and furniture on the top, which are all factors affecting the dead load. People and animals are live load factors, and snow can be a separate load consideration or part of the live load. Spacing between joists and rafters contributes to load variables too.

How much weight a 2×6 can support depends on orientation, location, distribution, and duration. Orientation is whether the 2×6 is on end or vertical, horizontal, or diagonal and whether the flat face or edge is up. The location of the weight in relation to any supports or span needs to be considered too. The distribution of weight with other support members, bracing, and sheathing, plus the duration the weight is carried are also determining factors.

A vertical 2×6 stud in a blocked and sheathed wall will hold more than 7000 pounds on its end before buckling. A horizontal 2×6 plank on edge is generally rated for 50psf (10psf dead load + 40psf live load) or 53 pounds per linear foot. So, a 2×6 spanning 8 feet should be able to support (8×53) 424 pounds along its length. A 2×6 on flat will carry about 4 pounds per linear foot or around 7% of one on edge. On an 8-foot span, that would be about 30 pounds in one location before bending beyond acceptable deflection values. 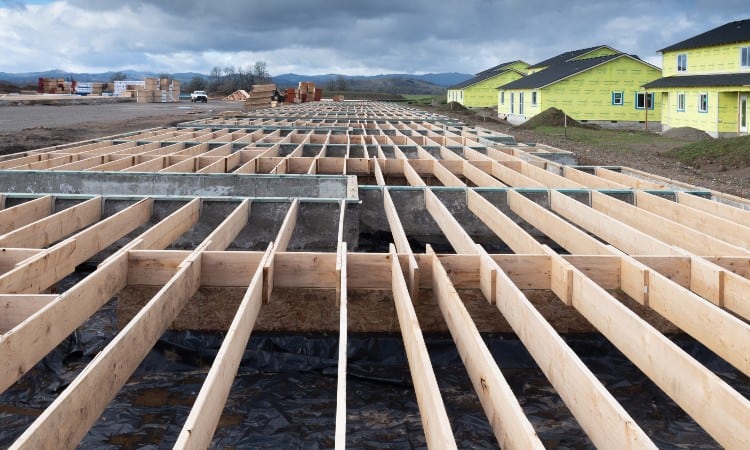 The distance a 2×6 can span is determined by the species and grade, load requirements, spacing, and use. Span increases as the spacing decreases but it decreases as loads increase. The grade and wood species also determine how far the joist can span.

The required span, spacing between floor joists, and load requirements often determine the dimensional lumber used. The use of 2x6s for floor joists is common in sheds, cabins, and other small structures, or for decks built within 30” of the ground. Additionally, many smaller two-story homes have 2×6 joists for the upper floor sleeping area. Always check the current local building code for span values.

How Far Can You Span a 2×6 Ceiling Joist?

Ceiling joists may be 2×4, 2×6, 2×8, or 2×10 depending on the type of ceiling it supports, whether there is any living or storage space in the attic above, and the span required. Drywall and plaster are two common ceiling finishes and affect dead load differently. A dead load of 5psf is common for drywall while plaster generates a dead load of 10psf.

If the attic has a living or sleeping space, then the ceiling joists become floor joists and must be spanned accordingly. Ceiling joists should be continuous or properly joined above interior walls according to the codes. They should also connect to rafters at the top plate when run parallel to the rafters and fastened to the top plate if not parallel.

A rafter span is measured from the center of the ridge or ridge beam to the outside face of the supporting top plate, or the outer edge of the birdsmouth or cleat. How far a rafter can span is determined by the wood species and grade, spacing between rafters, and the loads it must support. The load includes factors such as whether the ceiling is finished or not, weight of roofing (asphalt vs metal vs slate vs tile), wind loads, and snow or live loads. Rafters commonly span longer distances than joists, so it’s best to check your local building code to make sure the timber selected fits all the span factors.

Depending on the factors, a 2×6 rafter can span between 4’-11” and 18’-0”, which is a rather large difference. The span decreases as the spacing and load increase and is dependent on the type and grade of timber. The stronger the species and higher the grade, the farther it can span. Roofs with lightweight roofing and no ceiling commonly have a dead load rating of 10psf and those with heavy roofing are rated at 20psf. However, rafters with light-weight roofing and a drywall ceiling have a dead load of 15psf while a plaster ceiling is 20psf. Heavy roofing changes the dead load rating to 25psf and 30psf respectively.

Decking is the material that spans and fastens to the joists upon which you walk and place furniture. Interior decking today is usually plywood or OSB. Exterior decking is often 2×6 or 5/4×6 pressure-treated lumber, cedar, redwood, other exotic woods, or composite/manufactured materials. The codes call for nominally 2” thick decking or other approved span-rated decking.

2x6s are 1/2″ thicker and thus stronger than 5/4×6 and can span up to 24” O.C. while most 5/4” thick planks max at 16” O.C. spans. Loads affect joist spacing and span which also impact decking choice. Hot tubs require additional support, so always reference your local building code when building a deck.

Decking is commonly pressure-treated, cedar, or redwood and can span up to 24” as a 2×6 or 16” if a 5/4×6. Pressure-treated lumber is often made from the most available local rated material, which in my area is SPF (spruce-pine-fir). The pressure treatment process doesn’t adversely affect the strength of the wood, so its span distances are based on the species, not the treatment.

A 2×6 on edge is thicker and thus stronger than one on flat and can carry about 90% more weight for an equivalent span. Joist spans for exterior decking differ from interior spans of equivalent species and grades too. Most decks are rated for a 10psf dead load and a 40psf live load, or a total load of 50psf. At 12” O.C. spacing, a #2 Douglas fir deck joist can span 9’-6” and a #2 Southern pine 9’-11”. However, with the same loads and spacing, an interior #2 Douglas fir floor joist can span 10’-9” and the Southern pine 10-3”. The same deck joists can cantilever up to 1’-6” depending on the joist spacing too.

A 2×6 joist is often used for decks within 30” of the ground that don’t require a railing. Exterior decks are commonly rated for a live load (LL) of 40psf and a 10psf dead load (DL), for a 50psf total load. The wood species, grade, and spacing between joists determine the distance a joist can span.

When building a deck, ensure you check the local building code for span and spacing based on the species and grade of lumber you’re planning to use. It should be noted that deck joists span shorter distances than interior joists with equivalent factors. So, make sure to reference the correct span tables.

Deck beams rest on deck blocks, posts, or other acceptable structures. Beams support the joists, decking, and furnishings on the deck, known as the dead load (DL), and people, pets, and snow, known as the live load (LL). Beam construction, dimensions, and spans are all addressed in the building code. Beam span is also determined by the deck joist span.

Headers are specialized beams over window and door openings in wall framing that support and transfer loads above them to other structural members below. Location and load are the main determining factors in the header span. The span differs for headers in interior and exterior walls and is affected by the building width, number of floors, floor structure and support, and snow load. In most cases, as the building width and number of floors increase, the header span decreases, so check the building code. 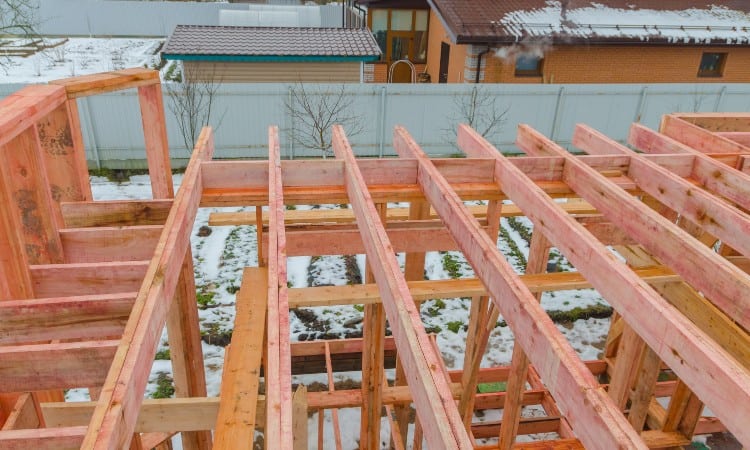 Triple 2×8, 2×10, and 2×12 headers for exterior and interior walls are identified in the building codes, but triple 2×6 headers are not. A triple 2×6 header may still be used, but a Structural Engineer needs to review and stamp the design. Realistically, it would be easier and probably cheaper to substitute a double or triple header of greater dimensional lumber.

A 2×6 can span between 2’-1” and 20’-8” depending on wood species and grade, the use or purpose, loads, location, interior or exterior use, and other factors. To ensure the span is compliant with the code, always reference the building code, your local building department, or a Structural Engineer. Hopefully, this guide has proved helpful in determining the 2×6 spans for your building project.