It is important to remember that a flight of stairs is one unbroken set of stairs. Stairs that have a landing, then continue down at a 90-degree angle in an L-shape are not considered a “flight” of stairs.

In this article, we’ll dig deeper and talk about typical lengths and heights of a standard set of stairs. There is no standard number of stairs required by code. On the other hand, some regulations must be followed in terms of stair rise and run. These give us a clear idea of the number of steps you’ll need in a flight. 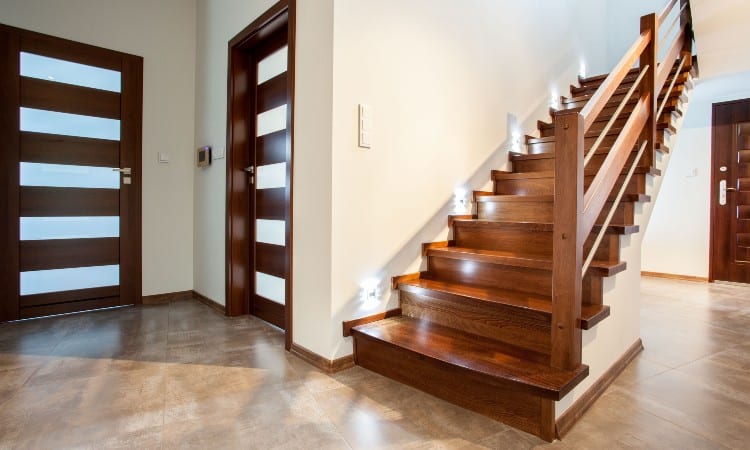 What is a Flight of Stairs?

A flight of stairs is a set of stairs that is not interrupted by a landing or any other feature. It is a run of treads of the same rise and run. Flights do not require certain amounts of steps, but they do have to have steps that are evenly spaced without a break.

One flight of stairs is a length of stairs that is not broken up by a landing. There is no minimum or maximum length or number of steps. One flight can be curved, spiral, or straight. All steps in a flight are of the uniform rise and run per tread. 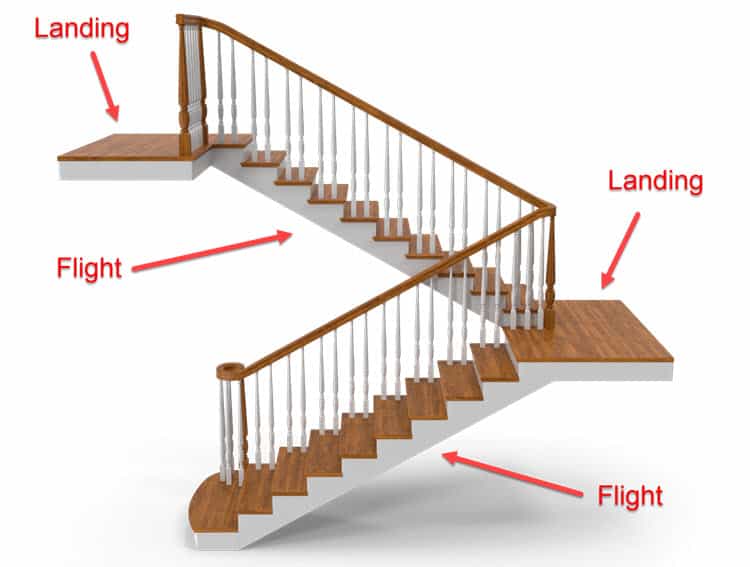 A flight of stairs, by definition, is a set of stairs of the same rise and run per tread, without a landing or any other feature that interrupts the stairs. A flight of stairs can be any type or style as long as it is uniform and uninterrupted.

The phrase “flight of stairs” derives from, to the best of our knowledge, an old French phrase that meant “to fly up stairs” going back hundreds of years. The word “flight” indicates that one can ascend or descend stairs quickly without interruption.

There is sometimes confusion regarding stairs and steps, as we don’t say “flight of steps”. Steps refer to either a single step on a flight of stairs or are more commonly used to reference outdoor stairs. When referring to a set of steps indoors, we use the term “stairs”.

Benefits of a Flight of Stairs

One flight of stairs can save space in a house and can also be visually appealing to the aesthetic of the house, as long, straight lines make for pleasing sightlines in a space.

It is standard for homes to have either between 8’ and 10’ ceilings, with 8’ being the most common. Unless you have a split-level home, dwellings with ceilings of these heights will almost always have at least one flight of stairs.

Flights of stairs are more common simply because there isn’t the space to have a landing in a traditional home, and there isn’t a necessity. While long staircases may need landings due to space constraints, these are often only found in structures with more distance between floors.

While one straight run – or flight – of stairs might be desirable, it just might not be possible in your house. You may have to use a landing, and if so, you would then have two separate “flights” of stairs instead of one.

How Many Steps In A Flight Of Stairs?

There are several ways to calculate the number of steps you’ll need, but the simplest is to take the total ceiling height, including the width of the joists supporting the floor above and the thickness of the subfloor.

Number of Steps for 8’ Ceilings

For example, your home has 8’ ceilings, with 10” wide joists supporting the floor above. 10” wide joists are 9 ¼” wide. You also have 3/4” subfloor on top of those joists. Therefore the total rise from the bottom to the top floor of your flight of stairs is 8’ 10”. Convert that total into inches to get 106”.

Number of Steps for 9’ Ceilings

For homes with 9’ ceilings, your total rise for a flight of stairs will be 118”, using the same dimensions for the joists and subfloor as the previous example.

Divide 118” by 7 ¾” and you get 15.2. With stairs, you cannot simply round down to 15 if you want fewer steps. If you did that, then you’d end up with a final step of about 4”, which would be awkward and dangerous. You have to round up and adjust the rise of each step accordingly.

Number of Steps for 10’ Ceilings

What Is the Minimum Number of Steps in One Flight?

The building code states that the maximum riser height is 7.75”, which ensures you have enough steps for a safe flight of stairs. Knowing this number, we can figure out a minimum number of steps allowed for one flight of stairs.

For example, the IRC dictates that there cannot be more than 12’ of vertical rise between floors or landings. Therefore, for that distance, what is the minimum number of steps you can have? Let’s calculate.

Therefore, you cannot have less than 19 steps for a 12’ vertical rise. After 19 steps, the stairs must terminate at the next floor, or you must have a landing before steps can continue.

For any other vertical span, such as 9’ or 10’, convert to inches and divide by 7.75 to determine the minimum number of steps for that vertical span.

Maximum Number of Steps in a Flight of Stairs

There is a maximum number of steps per flight of stairs. According to the IBC, the minimum riser height is 4”. A riser any shorter than 4” can risk the safety of those using the stairs; therefore we keep risers between 4” and 7 ¾”.

How Long is a Flight of Stairs?

The length of stairs can vary widely since tread depths often see a wider variance than riser height. Since vertical drop is more of a safety concern per step than tread depth, builders and DIYers often manipulate tread depth to fit horizontal space.

The minimum tread depth of a residential step is 10”. Each tread must have a nosing that is at least ¾” beyond the front edge of the step and no more than 1 ½”. There is no maximum tread length.

Calculating the length of a flight of stairs involves knowing the depth of your tread and the length of the stair tread nosing. Minimum tread nosing is ¾”. Thus, if you have 10” treads, subtract ¾” for true horizontal span – so, 9.25”

Length of Staircase for 8-Foot Ceiling

How Long Is a Staircase for 9 Foot Ceilings?

Length of Staircase for a 10 Foot Ceiling

Maximum Length of a Flight of Stairs

Secondly, a flight of stairs must terminate in a landing that is at least 36” long. Therefore, a flight of steps cannot span the entirety of a wall, as room must be given for the stairs to terminate. So your stairs are constrained by the overall dimensions of the home and code restrictions for stair landings.

How Tall is a Flight of Stairs?

Homes with ceilings that are 9’ or 10’ will have stairs that are either 10’ or 11’, respectively. Again, the actual height depends on the floor framing and, to a lesser extent, the subfloor on the top floor.

To calculate stair height, take the ceiling height and add the width of the joists that frame the floor where the height of the stairs terminate. Typically this is either 8”, 10”, or 12” dimensional lumber. Then you have to add the thickness of the subfloor – normally between ½” and ¾”.

Most stairs are framed during construction and are calculated without the finish floor in place, which is why we only calculate the subfloor in our calculations.

You have lots of options when it comes to varying your flight of stairs. You can use an L-shape design with landings or a spiral staircase to maximize space. If choosing a spiral staircase, remember they have an extra set of code standards you must follow.

I wish you luck with your next stair project. Remember to always work safely and measure twice. If you still aren’t sure, then consult a professional – happy building!