One of the first homes I ever lived in featured a set of stairs leading to the basement that was extremely steep. On top of that, you had to duck your head down every time to avoid the floor joists from the main floor. After hitting my head so many times, I’d always wondered how to fix steep stairs with little headroom.

Fixing steep steps requires you to lengthen your staircase. To do this, you can move your stairs back, which means removing a section of the floor from the top landing. This is the best option if there is not much headroom. If headroom isn’t an issue, you can extend the stairs further into the basement.

A stair renovation is a large task if you are planning on moving the whole set of steps. Issues with the headroom will require you to remove a section of your main floor, either right above the stairs or on the top landing, so you can move them back. 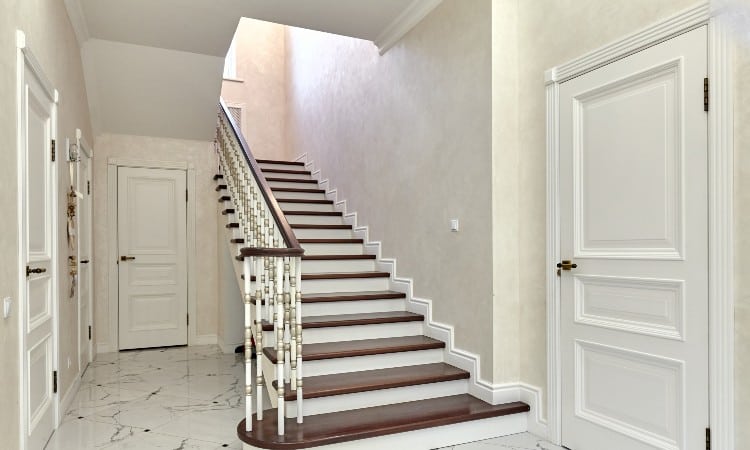 What Is Considered a Steep Staircase?

Stairs are steep in an older house for a variety of reasons. First, many older houses did not adhere to any building code because there was either no building code to speak of at the time of construction or built without regard to code, which is much less common today due to more stringent enforcement and the fear of accruing costly violations.

But why did builders of older homes want steep stairs in the first place? Aren’t they a hazard? Well, yes and no. First, a steep set of stairs is beneficial in that it saves space, much in the same way a spiral staircase saves space. The footprint of a set of steep stairs is drastically smaller than steps built to code.

Also, steeper steps were more common because adequate headroom within the staircase wasn’t as big of a priority. People were smaller than today and it wasn’t necessarily a huge deal to lower your head a bit as you walked down a set of stairs. Not anymore.

If you think your stairs are too steep, get out your measuring tape. If your rise is greater than 7 ¾, then your steps are too steep. If you have stairs like that, then you’ll want to make sure your treads are at least 10” or more in width. You’ll also want rails on both sides for safety.

What is The Minimum Headroom Required Over a Stair?

While 6’ 8” might seem like more than enough room, it is less than you’d think. As you descend stairs, your momentum carries you forward. So while the headroom might be 6’ 8” from the top of the tread, you are standing on, your head is not right above that tread. Therefore, the seemingly overly adequate height requirement is designed to save your head as your momentum carries you down the steps.

The 6’ 8” headroom requirement is based on the IRC – International Residential Code. Commercial buildings may have different requirements and are often more strict.

When considering the headroom minimum, remember that it applies not only to the steps but also to the top landing and bottom. For instance, after you descend the stairs and have just stepped off the steps, the minimum headroom should still be 6’ 8” even though you technically aren’t on a stair.

Since you’ve measured diagonally along the stair nosings, the bottom of the diagonal includes the landing or floor just beyond the bottom-most riser, up to the width of a tread. So if you have a low-ceilinged basement with ceilings barely over 6’, your landing still needs 6’ 8” of headroom. See below to find out ways to accomplish that.

How To Fix Steep Stairs With Little Headroom? 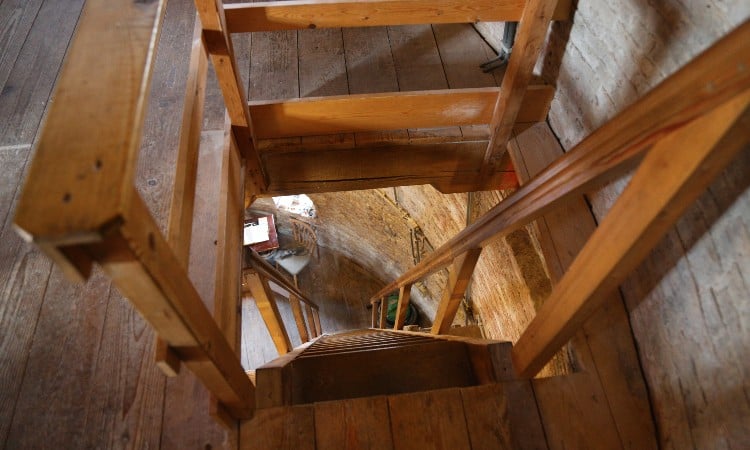 Steep steps can be fixed, but the methods may not appeal to many homeowners. The solutions range from DIY hacks to wholesale teardown and rebuild. Since stairs exist in harmony with two different floors in your home, there are many hurdles to clear before you decide to extend a set of stairs.

Fixing steep stairs requires a lengthening of the actual staircase. If you remove elevation in each step, then you’ll have more treads. More treads mean more distance – or run – the steps will occupy. The more distance means that your stairs will push outwards anywhere from several inches to a few feet. Let’s go over your options for fixing steep stairs.

Tear Down and Rebuild

If you are looking to make your steps safer, this might not be the best option. First, it takes time. Second, for some time, you will be without stairs to another floor of your house while you renovate, which is another large drawback.

Tearing down is the best way to go, however, as you’ll have a properly constructed set of stairs built to today’s code. It’s also the best way to aesthetically integrate your new stairs with the rest of your house, as you’ll be starting from scratch and can finish it to your taste.

Create a Landing with Switchback Steps

If your floorplan doesn’t let you remove an entire flight of steps and replace it with a longer one, then perhaps you can expand horizontally instead of vertically. That means you reduce your rise and lengthen your treads to create a landing at what was the termination of your original stairs.

From that landing, you’ll have stairs that go at a right angle, in an L-shape, or switch back towards the preceding steps immediately adjacent.

To accomplish this, you’ll have to make your top tread thicker. So if the rise of your top step was originally, say, 8 ½”, then you’ll put down a half-inch thick tread on the tread just below that rise. That will make your first rise 7 ¾” and code compliant.

The problem with this method is that it will force you to add increasingly greater thicknesses of tread on each descending tread to make every rise 7 ¾”. You can do this by adding lumber and building each step up. This can be difficult since each step will require more wood and a different thickness. But it saves time since you don’t have to remove steps.

Once you’ve raised each step to make a uniform 7 ¾” rise on each stair, you’ll have to build a landing, a new, smaller flight of steps.

Again, this option is best only if you cannot remove the original stairs and make a longer flight. Although you are retrofitting, you still will need to build a landing a new flight of stairs off that landing. Thus your time savings won’t necessarily increase versus building a whole new flight of steps and tearing the old out.

How to Gain Headroom on Stairs

If you want to keep your stairs as they are and increase the space above your head to achieve more room or a code-compliant minimum of 6’ 8”, then you have a few labor-intensive options.

First, check your floor plan. What is directly behind the space you want to raise? Is your kitchen behind it, or is there a closet? If you have surplus space, whether it’s a closet or utility room, you could remove some of the floor and wall to increase headroom.

You’d have to first remove a floor joist or two and shore up the cut joists with some cross-bracing and heavy-duty fasteners. It can be done as long as you know what you’re doing. Then you’d have to finish off space, which would require a new wall and finishing. It would be a large job and most would require a professional to complete the floor framing as it is structural and a safety issue.

If your stairs were unusually shallow, to begin with, then you could make them steeper. If not, then the only solution is to remove physical headspace, which begins with the labor-intensive option of adjusting your floor joists.

Can I Make My Stairs Deeper?

To make your stairs deeper, your only option would be to remove the existing treads to adjust the stringers. Adjusting the stringers would require you to use a saw, either a reciprocating or circular saw, to cut each stringer tread to achieve your desired riser height.

The problem with this is that you’ll end up with a bottom step that is much lower than the rest. While you might not care about that, it’ll make your steps not code compliant as you are only allowed an overall variation of ⅜” amongst all your risers.

You can build a landing and have an L-shaped staircase, which would allow you to have deeper steps on the upper portion of the stairs, and shallower steps on the lower portion. Whatever you decide, this is also a labor-intensive undertaking that might require professional guidance if you are having trouble deciding how to make your steps deeper.

Can You Fix Stairs that are Too Steep?

Yes, you can move your staircase back. To do that, you’ll have to remove the existing steps, adjust and remove some of the floor framing on the upper part of the steps, and install a new shallower staircase that is code-compliant.

Remember that stairs can have a maximum of 7 ¾” rise and a minimum of 10” of the run. You can attempt to retrofit each tread in the manner described above. Or you can start fresh if your floor plan allows it. Both ways require intensive work and are for experienced DIYers or a carpenter.

How Much Does it Cost to Fix a Staircase?

Fixing a staircase requires a significant amount of lumber and potentially new stair stringers. If you are starting fresh, then you’ll need new stair finishing features such as treads, risers, nosing pieces, railings, and more. The finishing details are where the costs pile up.

Removing old stairs costs nothing if you already have a few common tools lying around, such as a large pry-bar, a reciprocating saw, a circular saw, and other common power tools.

If you hire a carpenter to remove the old stairs and install a new set, including altering the initial floor plan to make your stairs longer and more modern, then you’ll be looking at the cost of at least $5000, and possibly more.

On the other hand, if you remove the old stairs and want a pro to come in and install a new set of stairs without any further alteration, then you’re probably only looking at less than $2000 and less if you opt to finish the stairs yourself.

Fixing steps is a complex job, and it becomes harder the older the house is and the steeper the stairs. Many try and get away with some patchwork retrofit, fiddling with tread thickness and riser height, but it is far easier to tear everything out and start fresh.

If you intend to embark on fixing stairs yourself, remember that anything you do to your floor joists is structural, for which you’ll need a building permit. Whether or not your choose to get one is your choice, but I recommend it if only because it’ll ensure the safety of your re-built steps. Stairs can and do, collapse, so it’s best to stay on the safe side with this renovation.