Maybe you’ve heard people refer to their floor joists, or the main beam in their home, or even a girder in a house. With all this terminology, it’s easy to get confused with the names of structural components in a home. When it comes to a joist vs. beam vs. girder, what’s the difference?

Therefore, the main beam in your house isn’t just a “main beam” – it’s a girder beam. And the floor joists in your house are not just “joists”, but are technically “joist beams”. Simply using the term “beam” is not accurate when referring to any structural component of your home.

In this article, we’ll go through the various examples of joists and girders, as well as other types of beams you might find in homes and other common structures. We’ll also outline the differences between the three so you never mistake a girder for a joist – or a beam – again! 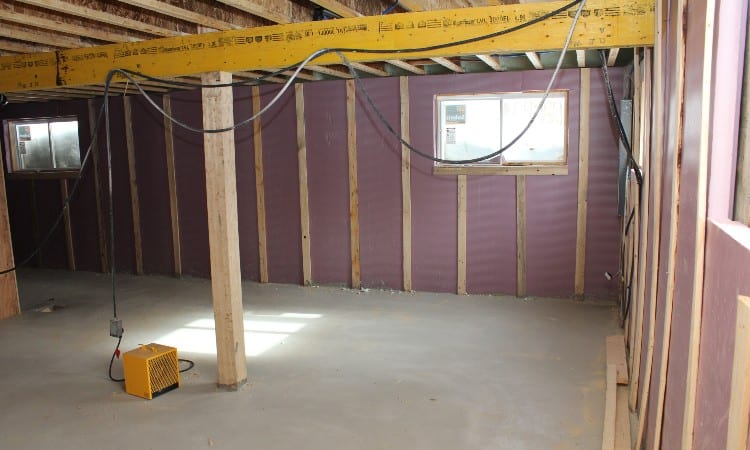 Before we get down to the details, let’s take a look at the key differences between beams, joists, and girders. The main thing to remember is that girders and joists are beams. Beam simply refers to a horizontal, load-bearing structural member.

What is a Beam? 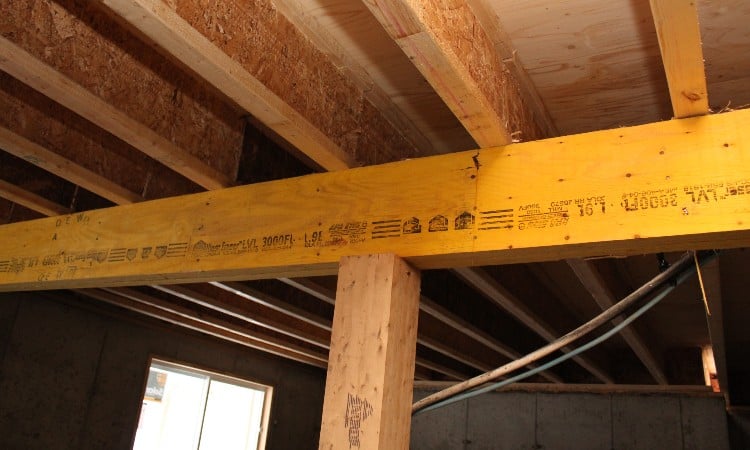 A beam is a horizontal, load-bearing member in a structure. Beams are not to be confused with posts, which are vertical and support a beam. All homes have beams, and most homes will have many different types of beams, including joists, girders, and headers.

Beams are found in all parts of the home, from basements to attics, and may or may not have specific names that set them apart from other beams. For instance, 2×4 stud framing will have 8’ vertical studs topped by a horizontal stud as part of the wall framing. The top stud is technically a beam but doesn’t have a name.

But if you have rafters, all the rafters connect to a ridge beam. Headers span the space above windows and doors, transferring loads above it to the vertical studs on either side of the opening. These beams have specific names. Regardless of the type of beam, they are all sending loads to the support members beneath them.

There are many different types of materials used in constructing a beam. The main factor is what type of beam is being fabricated and in what type of structure. Bridges and large commercial projects will use, almost exclusively, steel. On the other hand, most homes feature beams that are all some type of dimensional lumber. Let’s take a look at the various types of beam material below:

What is a Joist? 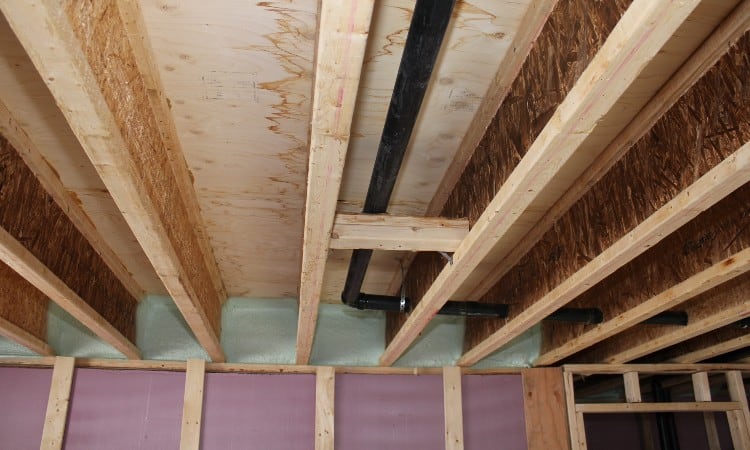 A joist is a secondary horizontal support beam. In a home, it directly supports all subfloors in a house and is always supported by a girder beam or beams. Joist beams will always run perpendicular to a girder beam.

Joist beams are made from steel, dimensional lumber, LVL, or engineered lumber. In some homes, trusses are popular for use as joists. These are still considered joist beams, as each truss acts as a joist beam as it is still supported by a girder beam.

While many homes are now built with LVL or engineered joists, the most common floor joist for a home is dimensional lumber. Common widths of dimensional lumber used in joist beam construction are either 2×8, 2×10, or 2x12s. They are usually spaced 16”, 19”, or 24” apart.

Yes, floor joists are load-bearing. Joist beams bear the dead load of the subfloor and framing above it. They also bear all live loads for the floor, or floors, above. Joists take the loads above and send them down to either the girder beam or sidewalls, which could be studs – lumber – or concrete walls if it is a basement – block or poured.

The length a joist can span without support depends on the type of material used to create the joist and the distance between each joist. For instance, a 2×12 floor joist spaced at 12” from one another can span nearly 25’ without support.

What is a Girder? 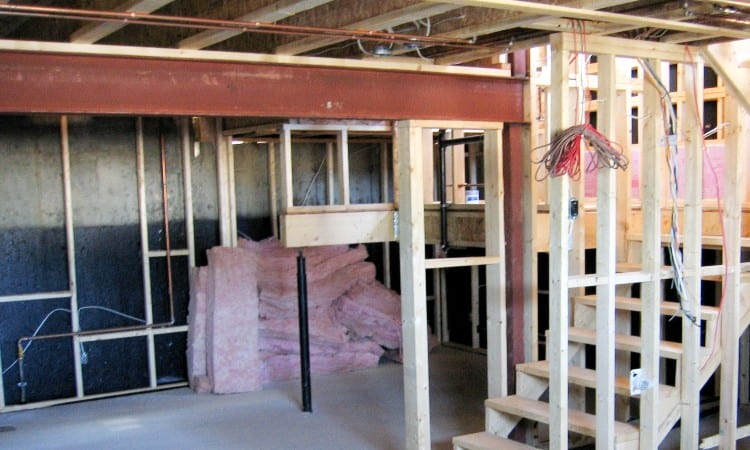 A girder is the main beam in a structure, supporting all other beams. As such, the girder is usually the largest and strongest beam in any structure. Girders are always supported by vertical posts, which sets them apart from other beams, which are always supported by a girder. They are often dimensional lumber or steel I-beams in home construction.

Girder beams are found at the base of most homes, supporting the frame of the house via the floor joists. Joists rest directly on top of the girder and share the load with the exterior foundation walls. A girder will be supported by vertical posts, which are either steel lally posts or dimensional lumber. Girders are also supported on either bearing end by the concrete foundation walls.

You do not often hear homeowners or contractors refer to a home’s girder beam as a “girder”. Instead, they’ll just call it the “main beam”. While that isn’t wrong, it technically isn’t right, either. The main beam in your home is a girder beam because it is supported by vertical posts. We more frequently hear of girders used in bridges and other industrial applications.

Types of Girder Beams in Homes

There are a few places in a home where we might find a girder beam. First, as mentioned above, we’ll find one acting as the main support beam in our home. We also might find one on subsequent floors if you have an open-concept layout and need a girder beam to span a large interior space, which in turn supports the floor or ceiling joists above it. 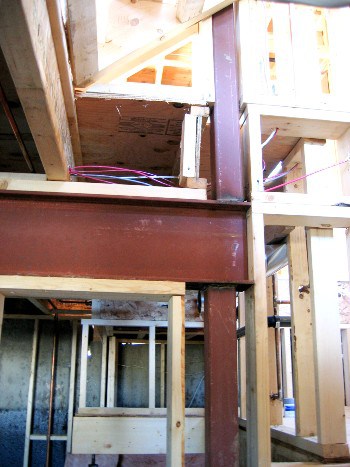 A steel I-beam often acts as a girder beam in homes and many other types of structures. It’s called an I-beam because the end profile of the beam is shaped like an uppercase letter “I”. This allows for a flat upper and lower surface, which makes it ideal for bearing loads and also makes it easier for posts to sit beneath to act as support.

A steel I-beam can span lengths of up to 45’ or more, but it all depends on the depth of the beam. Divide the length of the span in inches by 20 to find the appropriate depth of beam you need. The width of the beam should be no less than ⅓ the depth. Most homes use standard-sized I-beams – on the smaller side – and support them with posts.

You can span the entire length of your beam with supports with an appropriately sized I-beam. However, the cost and weight of such a beam might be prohibitive. Therefore, builders will opt for a smaller beam with posts or another type of girder beam, such as an open-webbed steel beam or lumber.

A girder beam made with dimensional lumber is probably one of the most commonly used girders in home construction. Cheap to buy and quick to fabricate, you can cut these beams to size on site easily. Fastening them together simply requires 4” or 3” nails. They are also incredibly strong if installed properly.

Beam spans vary depending on wood species type, lumber dimensions, the size and projected load of the structure being supported. A span table helps with determining the appropriately sized beam. You can sister 2x8s, 2x10s, 2x12s with up to 5 planks to create much stronger beams.

A solid wood beam is just that – a girder made from one tree. You’ll find these either in very old homes or newer construction that uses them as both a functional and aesthetic role. These days, prepare to pay for a solid sawn beam. A dimensional lumber beam spanning the same length will be much cheaper.

Solid girder beams can have weaknesses, as imperfections such as knots can lessen the load capacity of the beam. Secondly, these girder beams can crack or check. Checking looks like even small cracking in some places along the wood, particularly the end grain.

Joist vs Bean: What’s the Difference

Girder vs Beam: What’s the Difference?

Girder beams are the main horizontal support beam in any structure. They support the joist beams and all other beams found in a home. Girders will be the largest beam in a building and number much fewer than other beams in a building, such as joists.

Difference Between Joist and Girder

Joists and girders are related in that the girder beam always supports the joist beams. They are also always perpendicular to one another. Joists span the width of a structure, while girder beams span the length of the structure. While that rule doesn’t always apply, it is the most common outlay for those two member types.

Joists are more numerous. They sit atop girder beams and are usually 16”-24” apart across the length of a structure, which means in a 50’ home, there could be nearly 80 joists, as both sides of the girder will have joists. In that same structure, there might only be one girder beam supported by several posts.

Joists are also smaller than girder beams. In the structure mentioned above, if all the joists were 2x12s, the main beam might also be a 2×12, but with several built-up next to one another. A popular term for these girder beams is box beams. Box – or girder – beams are very common in home construction because they are fairly light, strong, cheap, and easy to cut. Plus, they provide an excellent bearing surface for joists to sit on.

Summary of Joist vs Beam vs Girder

When talking about various components of your home’s frame, it is important to know a beam from a girder from a joist. Just remember that you will never just call a particular structural member in your home “a beam”. If you do, you could be talking about a girder or a joist – or a header, ridge beam, box beam, or any other horizontal support.

It is helpful to know what role each type of beam plays in a structure. This makes it easier to identify fixes to problems you may have in your structure, from wobbly floors to rotting wood members. Just know that before you do any work on any type of beam in your house, you’ll need to account for the load it supports before you work on it or try to remove it!

Finally, when people talk about beams in their house, attempt to use the appropriate terminology. Over time, the names of certain structural parts of a home have fallen out of common terminology, which is confusing to the average homeowner. So avoid “main beam”, and remember that your home is supported by a girder beam, which supports the joist beams, and that anything load-bearing and horizontal is simply a beam.