One of the first homes I ever owned had extremely wobbly floors and I knew when I bought the place that something would have to be done to the floor joists – quick. After much deliberation, I realized that sistering the floor joists was the easiest and strongest way to fix my problem.

Sistering floor joists is a method used to strengthen support for the subfloor and finished floor on top of the joists. It involves installing a joist the same length and size flush against an existing floor joist.

In this article, we’ll go over everything you need to know about sistering a floor joist, including how to install a sistered floor joist, when you would need to sister a joist and issues you might run into when you are sistering a joist. 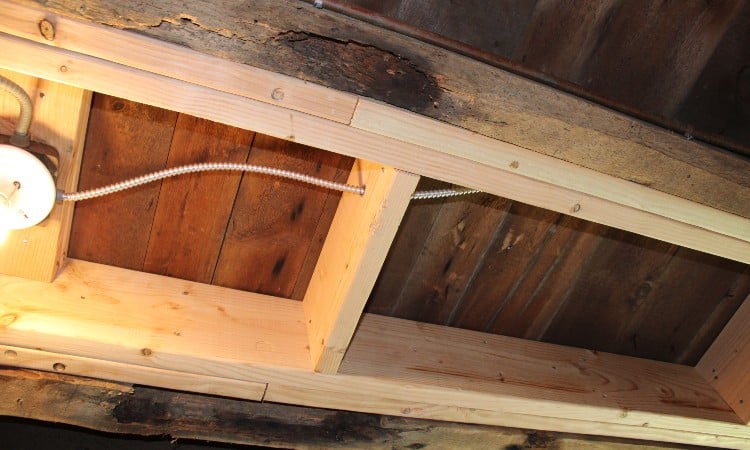 What is Sistering Floor Joists?

One of the most common ways to fix a sagging floor joist is to pair it with another piece of dimensional lumber of the same length and width. This additional piece of lumber is then mechanically fastened with nails or bolts to the sagging joist. Pairing the old joist with a “new” joist is called “sistering” a joist.

There are many methods for sistering a joist, and not all involve dimensional lumber – but using the same sized lumber is the most common method. Plywood, OSB, and even metal flitch plates can also be used as a “sister” to an existing wood joist.

Sistering floor joists is an extremely effective method for fixing a broken floor joist of any kind. Still, it can also be a fairly laborious process as you may have to remove a finished ceiling, wiring, plumbing, HVAC, or other utilities that pass through the problem joist.

Why Do You Need to Sister a Floor Joist?

Sistering is used to fix wobbly floors, sagging floors, or rotten joists. In most homes, a wobbly floor is caused by an oversized joist span, joists spaced too far apart, or joists that are failing. A sistered joist in any of these instances will correct a wobbly floor. The reasons for sistering a joist include:

The other most common reason for sistering a joist is to fix a sagging floor. Over time, joists can sag due to being undersized or rotten. They may also be spaced too far apart for the span they support. In those cases, sistering one or several joists after jacking up the old joists to the desired height will fix the sag permanently.

And finally, if you can do a visual inspection of your floor joists and find that some are rotten in places, or have soft spots due to moisture damage. It is important to repair those joists as they’ve lost some ability to handle a proper load. In those instances, sistering the damaged joist is required.

Code does dictate that all floor joists should bear a minimum of 3” onto concrete and at least 1.5” onto the wood. This goes for sistered joists, as well. Even if the old joist does not bear to that extent, the new joist must.

You also must have sistered joists if there is a perpendicular header longer than 4’ attached to the joist. This is often found when joists cannot run the length from bearing wall to beam due to stairs. In those cases, a header attaches to joists on either side. Those joists must be sistered and bear on both ends to a wall or beam.

How Long Does a Sister Joist Have to Be?

If space is limited and you need to fix a sagging or damaged joist, you can partially sister a joist, ensuring you get at least 3’ from the damaged area on either end. The further away from the point of deflection you can get the sistered joist, the better. Sistering a joist with one end at the point of deflection will not result in any significant reduction in the sag.

How to Sister Joists 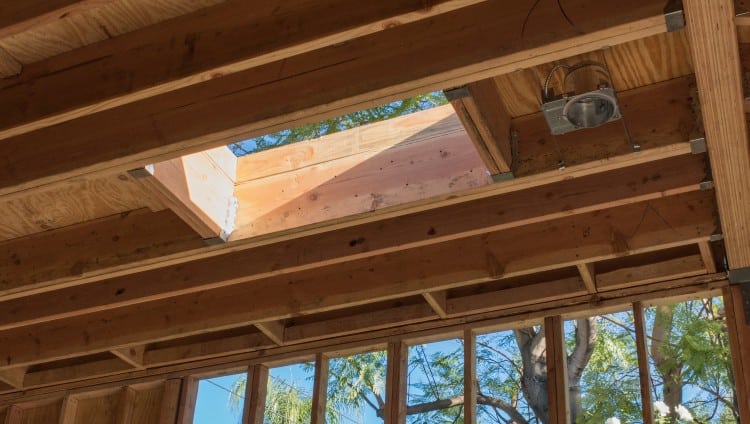 Sistering joists is a fairly straightforward process but can become laborious if you have to remove many utilities or the joist does not fit against the original due to shrinkage. In those instances, a shorter joist of the original width is preferred to a longer joist that is not as wide. Here’s how to sister a joist:

1. Remove Wiring and Other Obstructions

This will be the most time-consuming part of the process. All wiring, plumbing, HVAC, and other impediments will have to be removed. This usually means removing wires from the breaker box, detaching pipe from valves, and removing ductwork.

For many, removing so many pipes, wires, and ducts leads people to partially sister a joist. This is an option, but know that for optimal support of your subfloor, running a sistered joist the entire length of the original joist is recommended.

Ensure your new joist has at least 3’ on either end of the point of deflection – the point where the sag is greatest – to properly support the old joist.

If you cannot fit the sistered joist against the old due to tight fit, you can slightly – and carefully – jack up the old joist at either bearing end to slide the new joist into place. Be very careful, as you can damage your finished walls above if you jack the old joist too much.

Use a jack post or a floor jack with a piece of lumber placed directly below the old joist next to the point of bearing on the beam or wall it rests on. This should allow you to fit your sister joist up against the old one.

If installing a partial joist, you’ll also need to jack up the old joist to level. One tactic is to bold the sister joist to the new joist. Install a bolt on one end and the middle, then jack up the other end of the sistered joist to fit the old joist, install the bolt, and use a level to check everything is snug and proper. 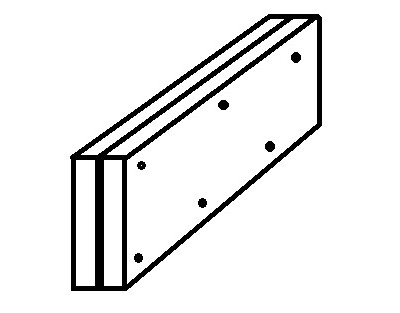 Use of nails and bolts is preferred to screws. The shear holding power of nails is far superior to screws, and joists deal with significant shear – vertical – forces.

When sistering, 16d spiral nails are best. A 16d nail is 3.5” long and will adequately fasten two 1.5” thick joists to one another. The ends will protrude through the other side – nail them off, bending them back into the wood.

If you use bolts in place of nails, use 2 3” lag bolts – one on the top and one on the bottom – every 24”. Alternatively, you can use 4” carriage bolts at the same spacing. Bolts should be spaced 2” from the edge of the joist to prevent cracking or splitting.

Finally, when nailing or bolting – or both – be sure to also use a very liberal amount of construction adhesive. Fasteners are the most critical component of this job, but the glue will help keep the spaces between the fasteners adhered and improve the overall connection of the sistered joists.

After fastening and installing, it is time to reinstall your utilities. Before doing so, check for level on your new sistered joist, as well as any creaking when you walk on the floor from above. If there are any issues, you want to solve them before you re-install all your wiring and plumbing. 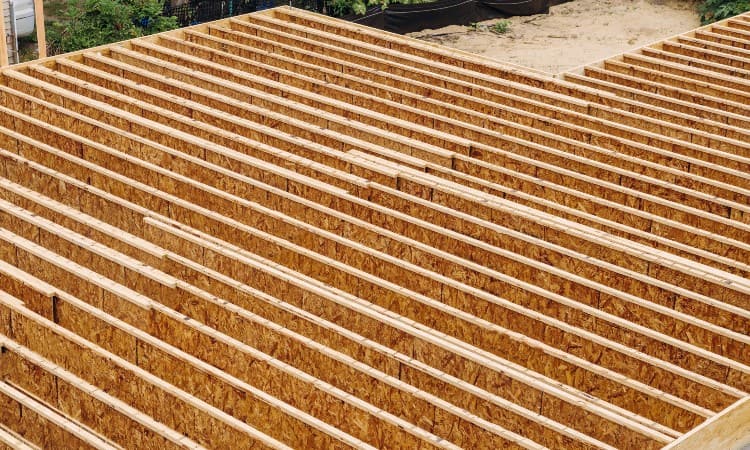 As well, I-beams have a flange – the top and bottom – with a narrower web between. This means that in addition to sistering a joist, you have to also include a filler piece to fit between the web and the sistered joist.

Since I-beams are difficult to match with dimensional lumber width-wise, it is more common to sister engineered I-beams with plywood or OSB. In these cases, it is still advantageous to sister the I-beam the length of the original joist. If not, spanning the sistered joist as long as possible is ideal.

Most I-beams will have a 1” difference between the web and the outer edge of the flange. You’ll have to fill that in ½” plywood or OSB in two layers. When doing so, stagger the pieces, so gaps do not overlap. Once you’ve filled in the web, use ¾” plywood as the sister joist, being sure to continue to stagger your plywood over the top of one another.

Use of the same nailing patterns as mentioned above is, except that you’ll be using shorter nails – most likely 8d – as the thickness would be less than if you were sistering two standard pieces of dimensional lumber. 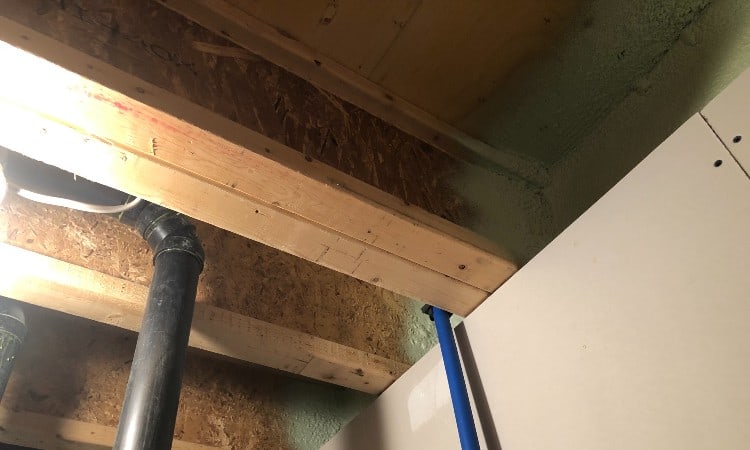 If you happen to have LVL floor joists, which are uncommon due to their cost, then the process of sistering them would be similar to sistering dimensional lumber. If you are able, find lumber that is the same width as your LVL joist.

Likely, you will only be able to partially sister the joist, as LVLs are used primarily in longer spans that dimensional lumber cannot reach. In that case, follow the same procedure as you would when sistering dimensional lumber.

The most difficult part about sistering a joist is that there is no clear consensus – such as building code – to guide us on how to go about the process. Every scenario is different, and the fix for your joists may be very different from someone else’s.

Use this article as a guide only, and consult an engineer or contractor for their opinion on your joist issues. Remember, joists are a key structural component of your house. A failed joist will result in a wobbly floor, cracked walls, and an unlevel living area. Fixing it is critical and you don’t want to get it wrong.