Stairs are common in many buildings and in landscape design. We’ve all walked up or down them, sat on them, and occasionally cursed as we’ve tripped going up or down. The culprit for our embarrassment and our comfort is often the stair tread overhang. If the overhang is too big or too small, it can affect the safe use of the stairs.

A stair tread is a minimum of 10” deep measured horizontally from its front edge to the nose of the step above. The stair tread overhang must project past the edge of the riser or over the step below by 3/4″ to 1-1/4”. An overhanging is not necessary for treads 11-inches or greater in depth.

In this article, we’ll look at interior and deck stairs, identify their components, and explain the tread overhang. We’ll discuss where and whether it’s needed, and how much the tread should overhang if required. By the end of your read, you should have a better understanding of what the stair overhang is and should be. 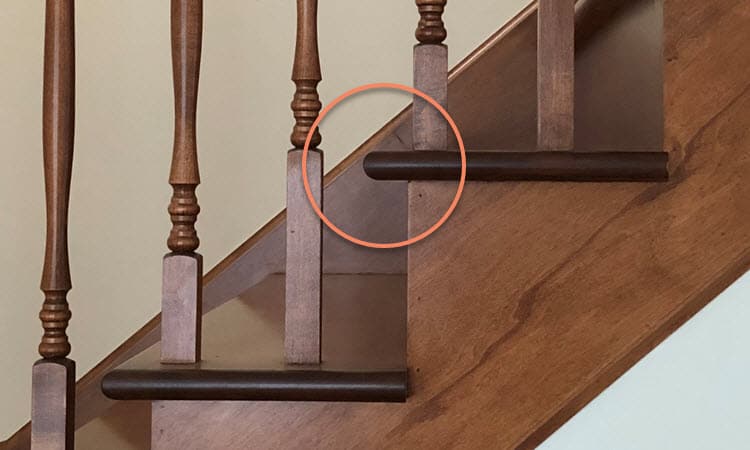 What Is The Stair Tread Overhang?

When talking about anything, it is helpful to know what different terms mean. Stairs are composed of stringers, risers, treads, nosing or bullnose, and a landing. The rise and run or going are also common terms when discussing stairs.

The step overhang is the portion of the tread that projects past the riser or riser line of the step directly below it. It may be squared, slightly rounded or beveled at the edges, or fully rounded or bullnose. The overhang is also called the nosing.

The overhang has been used for centuries in many countries to widen a narrow tread or for aesthetics. It provides more space for the toe on the ascent, and for the heel on decent. Modern studies have shown that the heel actually tucks into the space under the overhang on the descent.

Similar studies have also demonstrated that the nosing visually highlights the edge of the step, making it safer. Based on such practices and studies, the building code identifies what is necessary.

The International Residential Code (IRC or ICC) sets minimum and/or maximum guidelines based on common construction practices and research for safety purposes. It is reviewed and updated every 3 years.

The current publication is the 2018 version and Section R311.7 addresses stairways. Many countries and states adopt some or all of the IRC for their Building Code, so a good place to start any building project is with a review of the local building codes.

According to the 2018 IRC – Sections R311.7.5.2 and R311.7.5.3, the minimum tread depth is 10-inches excluding any overhang. Stairs must have an overhang between 3/4″ to 1-1/4” to increase the depth of the step, making it better for descent while maintaining a clear 10-inch going for the ascent. Treads that are 11-inches deep or greater do not require an overhang.

How Much Should a Stair Overhang the Riser?

The Building Code sets the minimum step run at 10” and the maximum rise at 7-3/4”; in addition, it identifies acceptable nosing projections. To increase the slope of the staircase and meet Code requirements, the forward edge of the tread may project over the step below. However, it should be noted that too much of a protrusion is as dangerous as too little.

Stair treads and nosings are addressed, respectively, by Sections R311.7.5.2 and R311.7.5.3 of the 2018 IRC. The Code identifies minimum and maximum requirements for both and is commonly adopted by many countries and states. It is recommended that local Codes be checked for requirements.

Tread depth must be a minimum of 10-inches horizontally measured from the front edge to the leading edge of the step above or below it. Nosings must be a minimum of 3/4″ to a maximum of 1-1/4”. A maximum allowable deviation of 3/8” is permitted between the greatest or smallest step measurements.

Each carpenter or stair manufacturer has a preference when it comes to the overhang depth, making the standard more of a range. Style and aesthetics compete with safety, costs, and comfort too. Nosing projections of 3/4″ offer greater safety than other dimensions according to some studies, but local building codes may dictate otherwise.

The acceptable tread overhang requirements according to the IRC protrude 3/4″ to 1-1/4” past the face of the riser or riser line to ensure the going is 10-inches. The overhang increases the foot placement space on the tread, but doesn’t change the depth of the going, or tread depth under the IRC definition.

Manufactured stair treads commonly are 11-1/4” or 11-1/2” deep to protrude past the riser by 1-1/4” or 1-1/2”. The forward edge often has a 1/2″ radius roundover to leave a 3/4″ or 1” flat extension past the face of the riser. Instead of ripping the tread to make it code compliant, many carpenters add 5/8” cove or scroll-work trim to the underside of the nosing and riser face. 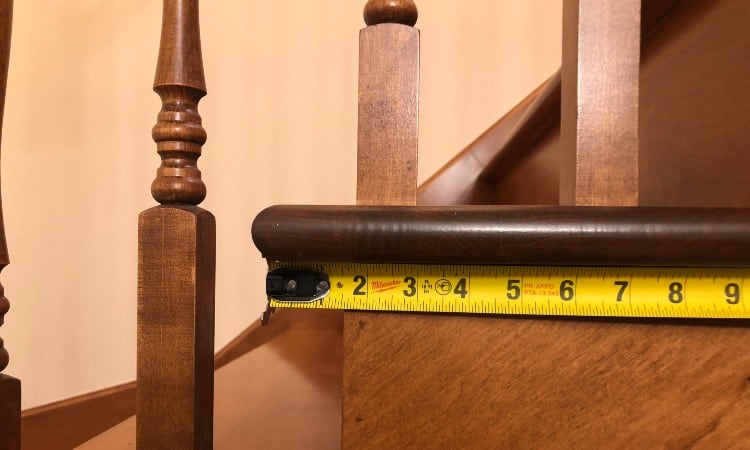 Stairs across the country and around the world vary in slopes, tread depth, and rise. What was acceptable in the past may no longer be, and the reason is usually due to safety. Steep steps with narrow treads have given way to wider treads and gentler slopes. In some cases, the addition of a nosing was all that was necessary.

Stairs with tread depths 11-inches or greater do not need to overhang the riser. Treads that are less than 11-inches must have a nosing that projects a minimum of 3/4″ past the riser line according to the 2018 IRC. Studies have shown that 3/4” nosings are among the safest overhang depths too.

The International Residential Code identifies the maximum nosing projection at 1-1/4”. Steps that overhang the riser too much pose a trip hazard when ascending and a slip concern on the descent. The overhang increases the amount of space available for the foot but must maintain a going of 10-inches.

Carpet on stairs soften the sound of footfalls and is aesthetically pleasing to some. The thickness of the pile should not increase the stair overhang beyond 1-1/4”, or be less than 3/4″ when installed.

The side stair overhang is commonly aesthetic and covers exposed side seams. Stairs closed in on one or both sides do not require side overhangs. Side nosings are not necessary but if used often match the overhang on the lead edge of the step and shouldn’t extend further than 1-1/4” past the stringer.

Building codes frequently view indoor and outdoor stairs as one and the same. The run is a minimum of 10”, the maximum rise 7-3/4”, and the width a minimum of 36” above railing height. Treads that are less than 11” must also have an overhang of 3/4” to 1-1/4” that protrudes past the riser or riser line.

Deck stair treads are often made of two 2×6 or 5/4×6 deck boards for an actual combined depth of 11”. 2×12 boards are sometimes used but have an 11-1/2” depth, so must be ripped or notched to meet code. The run unit of the tread without the overhang is a factor of the stringer design and the overall rise. The nosing depth will depend on the individual unit run of the stringer. A run of 10” would result in a 1” overhang using two 2x6s or 5/4x6s.

Outdoor stairs do not require a closed riser. The open riser permits better airflow and makes dirt and snow removal easier. It should be noted, though, that the gap between treads that are 30” above the ground or floor level cannot permit a 4” diameter sphere to pass through.

The tread nosing must overhang between 3/4” and 1-1/4” unless the tread is 11-inches or greater in depth. The stair lip improves safety by extending the horizontal space available for ascent and descent, and visually defines the step edge. The overhang also hides the seam between the tread and riser for a more aesthetically pleasing finish.

I hope you have a better understanding of the parts of stairs and how far the tread should overhang the riser and why. If you found the article helpful, please share it with others. As always, your comments and suggestions are appreciated.