Metal studs have been used for framing in multifamily high and low-rise structures for decades and their use in single-family dwellings is becoming more common. If you’re considering using them and wondering what standard metal stud sizes are, we’re here to help.

Standard stud sizes commonly used for non-load-bearing walls are 25-gauge metal 250S162, 350S162, and 550S162 studs. They are equivalent to using 2×3, 2×4, and 2×6 wooden studs respectively. Load-bearing metal studs require a thicker metal, so are typically 20-gauge or thicker in the exact dimensions as those used for nonbearing walls.

In this guide, we’ll discuss what metal studs are and their nominal and standard sizes. We’ll explain how to read their sizes, different gauges, and how far apart metal studs can be. Plus, we’ll discuss if they are load bearing, what size to use in a basement, and identify what is the most popular metal stud size. Our goal is to provide you with the information to choose the material best suited for your project. 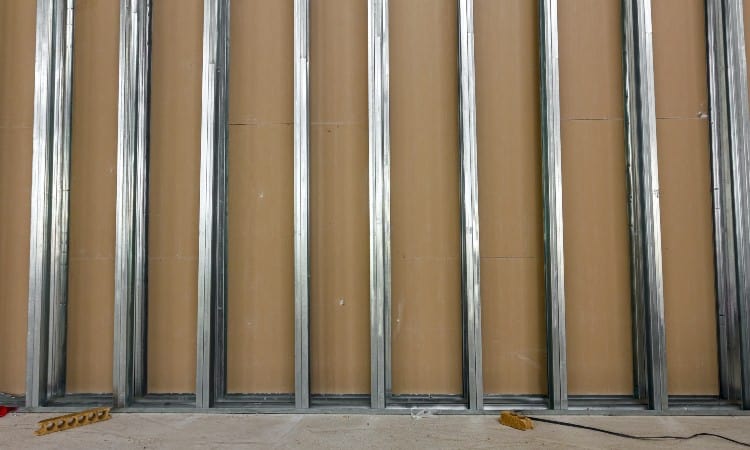 What Is A Metal Stud?

Metal studs are fabricated from 25 to 12-gauge cold-formed steel and are light and durable. Strips of galvanized steel pass through cold rolling machines, which bend and form the strips into C, U, I, and H-shaped metal studs of varying widths and lengths. They are used to form load and non-load-bearing walls. Load-bearing studs are thicker gauge steel.

Metal studs are UL fire-rated, non-combustible, termite and insect proof, mold and mildew resistant, and meet or exceed the requirements of building codes in most areas. They are used in commercial and residential buildings in place of wood.

C-shaped studs have 3 components, the web or back of the C which gives the stud its width. It has punched-out openings at standard intervals for electrical and plumbing services to pass through.

The openings also allow stiffeners to slide more easily between studs too. The arms or flanges of the C help stiffen the webbing and form the faces to which drywall or other material are fastened. The ends of the arms of the C are bent inward to strengthen the stud further.

I-shaped studs have a cross-sectional view like a capital I, with the web centered between the two arms or flanges. The web forms the depth of the stud, and the flanges stiffen it, making for a very strong stud. They are commonly used around ductwork, stairwells, and vertical shafts.

H-shaped studs have a cross-sectional view like a capital H. The middle web provides the depth while the two wider arms or flanges provide more space for finishes to be fastened. It is slightly heavier than an I-shaped stud.

U-shaped channels or tracks are similar to C-shaped studs but don’t have the final inward stiffening bends, nor are they punched for utilities. They typically fasten to the floor and ceiling as the top and bottom channels or plates into which the C, I, and H-shaped metal studs are inserted and fastened.

Do Metal Studs Have Nominal Sizes?

The web that forms the depth of the steel stud may have the nominal measurement or the actual dimension. The flanges or arms are slightly wider than the actual measurement of an equivalent wooden stud, providing a wider screwing face for drywall and other finishes. If looking for larger dimensions, the 800S is 1-5/8”x8”, 1000S is 1-5/8”x10”, the 1200S is 12”, and the 1400S is 14”. The larger ‘studs’ can also be used for headers, joists, and rafters.

What are Standard Metal Stud Sizes? 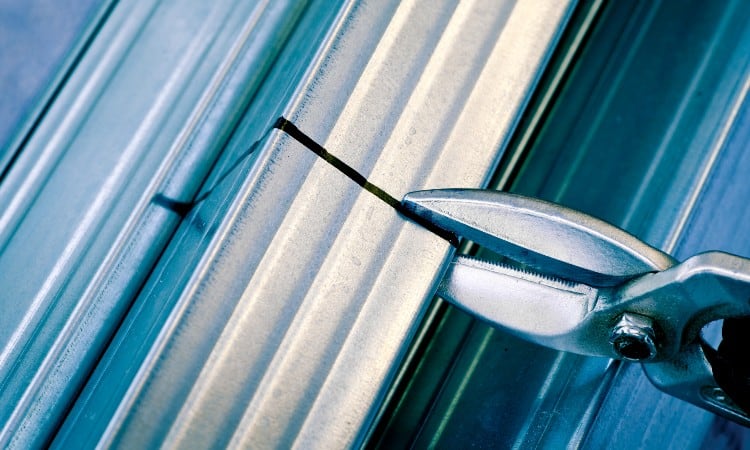 Steel studs are manufactured with different web depths and flange sizes, as well as different gauge and galvanized thicknesses. Sizes depend on what different manufacturers are producing and how the studs fit into the construction industry, which also includes building code compliance.

Chapter 6, Section R603 of the 2021 IRC (International Residential Building Code) addresses cold-formed steel framing. It identifies 350S162 and 550S162 metal studs as the minimum for code compliance in most wall construction. Metal studs used for headers are those that most closely match the nominal width of the 2-by lumber that would be used, so 600S, 800S, 1000S, and 1200S.

Metal studs are available in different widths, depths, and gauge thicknesses. The gauge of the metal and width of the stud determine the lateral and axial load capacity. Different manufacturers fabricate metal studs of similar sizes, plus some with unique characteristics. Section R603 of the 2021 IRC identifies the minimum dimensions for load and non-load-bearing cold-formed steel framing based on stud length, spacing, snow load, and wind speed. See Table R603.2(2)-IRC2021 or check with a Structural Engineer.

Wood studs have been used for hundreds of years and form the structural framework of many homes today. Initially rough cut, today they are planed and sanded into the dimensional lumber we know.

Dimensional lumber can be used for both load and non-load-bearing walls and come with different treatments for moisture, insects, or fire resistance. Wood is a renewable resource and can be reused and recycled. Plus, trees capture and store carbon, which is not released until it decays or is burned. So, homes built with wood with-hold carbon from the atmosphere.

Steel studs evolved much more recently from the use of heavy steel girders and beams in the late 19th century. The use of lightweight metal framing during and following WW2 in other industries such as aviation and transportation, lead to its use in commercial and high-rise construction. From there, it was only a matter of decades before they began appearing in single-family homes. Steel isn’t a renewable resource but it can be recycled and reused. Its fabrication, however, does use a lot of energy by comparison and produces more environmental issues.

Steel studs are lighter and not as strong as equivalent wooden studs, but don’t suffer from moisture issues such as twisting, bowing, expansion and contraction. They are insect, termite, and rodent resistant, and commonly galvanized to minimize corrosion.

Metal studs are fire rated but their thinness and low mass make them less reliable than wood construction in a fire. Steel also forms a better thermal bridge and requires more insulation to match the energy efficiency of comparative wood framing. Metal studs, however, reduce sound transfer between rooms better. Like wood, steel studs are easy to cut and fabricate for different uses. They are also pre-punched for wiring, plumbing, and other utilities.

The price of both wood and steel is driven by the market, so prices can vary from location to location and time of year. Plus, lumber prices depend on grade, while metal stud prices vary with the gauge of metal. During the pandemic, prices of lumber rose faster than those of steel, making steel studs more price attractive. However, lumber costs have dropped, so wood is again more economical. A wander through your local building supply store may be an eye opener too. The three in my area carry every size of dimensional lumber but only a limited selection of load and non-load-bearing 350S162 steel framing and matching track. So, everything else is a special order. The average post-pandemic price of a #2 or better 2x4x8’ stud in my area is $3.98, while the equivalent non-load-bearing 350S162-25 steel stud is $15.28. I found it a bit surprising that the load-bearing 350S162-20 was cheaper, at $14.75.

How To Read Steel Stud Sizes

Metal stud sizes are presented in different ways depending on the retailer. Some label them by their dimensions, and others use the manufacturer’s coding. So, an equivalent steel 2×4 stud may be labeled 3-1/2”x1-5/8” with its metal gauge identified, or as follows:

The thickness or gauge of metal studs determines their strength and use, and whether they are classed as load or non-load-bearing. Metal studs are manufactured from cold-formed rolled steel. Gauges are an old style of measurement and don’t reflect metric or imperial values. The lower the gauge value, the thicker the metal. Different metals of the same gauge can also differ in measured thickness too. The chart below identifies the common metal stud gauges or metal thicknesses.

Are Metal Studs 16 On Center? 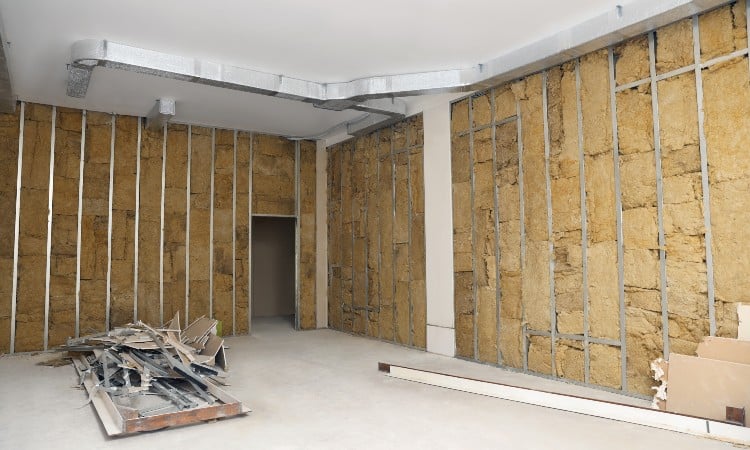 Metal studs can be spaced at both 16” and 24” centers according to Section R603 of the 2021 IRC. Much depends on the load and design values, and even 12” centers are acceptable. Construction panels such as drywall, insulation, and plywood are commonly 4 feet wide, so 12”, 16”, and 24” centered studs fit best for these materials. Load-bearing studs are often spaced at 16” centers, while non-load-bearing studs are frequently spaced at 24” centers.

Load bearing studs are manufactured from heavier gauge steel. Section R603 of the 2021 IRC identifies that metal studs of 20 gauge or thicker metal may be used for load-bearing construction. Tensile strength of 33KSI or 50KSI and gauges ranging from 20 to 12 or 33Mil to 97Mil are common thicknesses for load-bearing studs.

What Size Metal Studs For Basement?

Using metal studs to help frame non-load-bearing basement walls has become a common practice. Metal studs won’t warp, bow, or split due to dampness, so fewer drywall screws pop or cause dimples in the finish.

What Is The Most Popular Metal Stud Size

Hopefully, you have a better understanding of standard metal stud sizes and are better prepared for your building project.